In the last blog, we talked about the characteristics of different KOLs as well as how to choose from them (How to choose the right Live Streaming KOLs). However, it’s usually hard for one KOL to perform well on multiple platforms. Different live streaming platforms usually target different groups of core users with their unique user experience; a KOL must align his/her streaming program with the characteristic of the platform’s mainstream users to gain popularity.

While KOLs are important in gaining popularity for the products, the streaming platforms also play a nontrivial role as they determine the communication environment that stream viewers reside in. We should learn about how to choose the most suitable streaming platform to build the brand awareness and to improve sale performance. Let us start by asking:

What are the major live streaming platforms in China？

There are currently three major live streaming platforms in China: Taobao Live, TikTok, and Kuai Shou. All three of them take up nearly 75% of total GMV (Gross Merchandise Value) in live streaming industry. 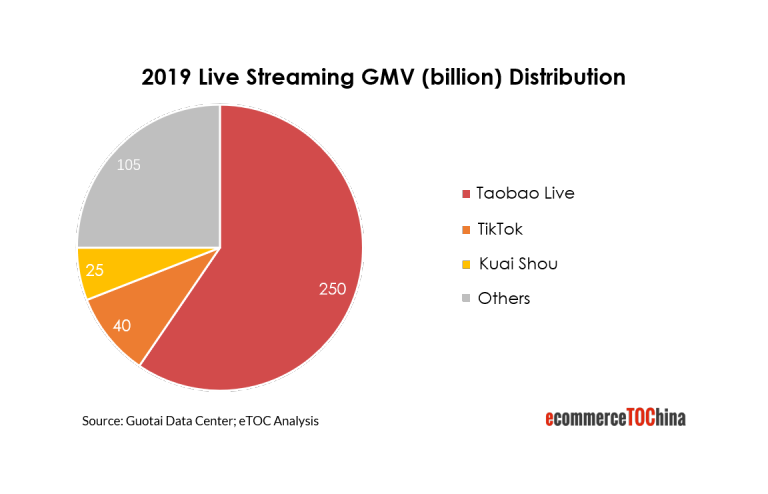 Taobao Streaming was launched in April 2016. It is a sales-driven live streaming platform developed by Taobao (Alibaba group), with its key focus on converting sales volume. Having Taobao and Alibaba as their customer base, it received great repercussions since first streaming program: about 0.5 million viewers joined the streaming platform during its first auction on April 21st 2016.

In 2019, according to Guotai data center, Taobao Streaming has achieved annual GMV of nearly 250 billion RMB, amounting up to 58% of total market share. It is the live streaming platform that generates the largest sales in China.

Despite its astounding sales generating ability, Taobao Live cannot fulfill users’ needs other than shopping. It is the traditional short video platforms, TikTok and Kuai Shou, that provides a venue for users to share own-generated contents, which serves as a great impetus for people to spend hours on them. Founded in September 2016 and March 2011 respectively, TikTok and Kuai Shou have become the online center of Chinese young audiences with their fast consumable UGC (user-generated contents). According to Chinese industrial info, the monthly active users for TikTok and Kuai Shou in 2020 were 518 million and 460 million people respectively, while Taobao Live has 400 million users in 2020. As a result, although Taobao Live generates the most sales, its top KOLs have only half number of fans as top KOLs from TikTok and Kuai Shou. 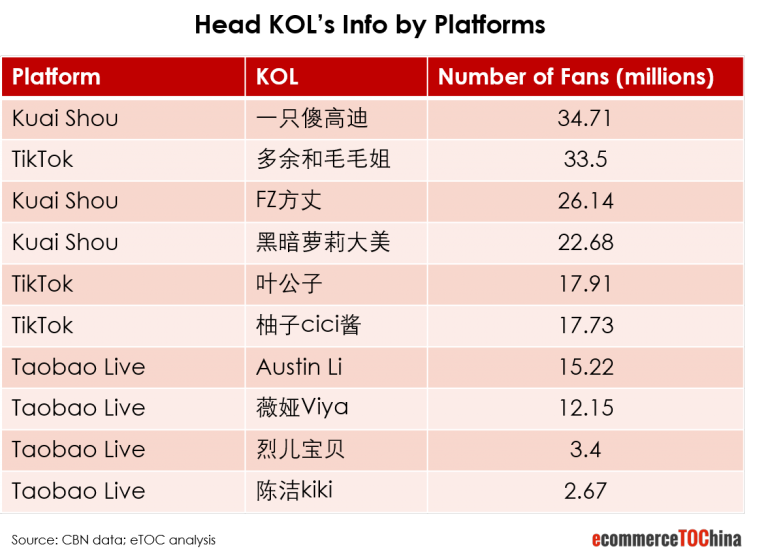 How to evaluate each streaming platform’s sales contribution?

Currently Taobao Live is the leading platform among all platforms. According to a user survey conducted by data100 of 3106 live stream audiences from all tiers of cities, 77% and 68 % of them, respectively, declared that they are aware of and have watched the major streaming programs on Taobao Live, while 61% of them have eventually purchased products through this venue. TikTok and Kuai Shou have less share of users awareness and conversion rate of making the final purchasing decision, but these three platforms take most of the market share and generates the most GMVs. 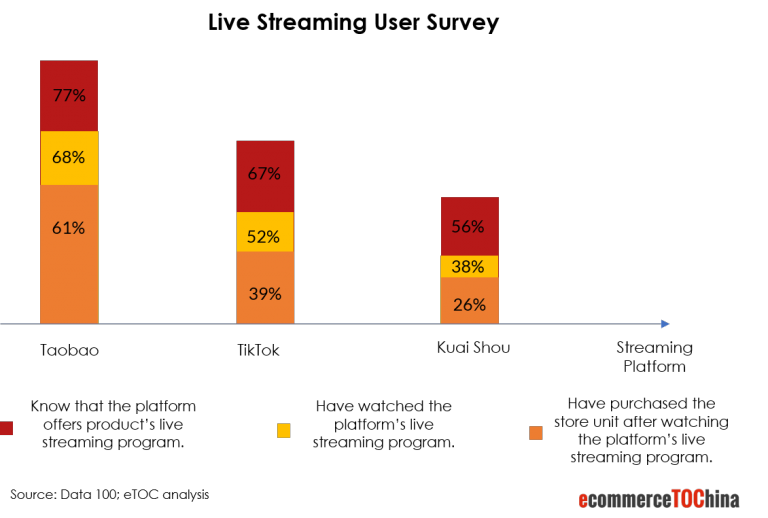 How 3 live streaming platforms differentiate from each other?

TikTok pushes video contents to users according to their preference that the system calculated hourly by algorithm. When users log in to TikTok, the video starts playing automatically and takes over the whole screen. In order to maximize the user experience and keep consumers always staying focused on the recommended contents, other functions are deliberately weakened, like search. As a result, users can directly enjoy their preferable type of videos, and this also allows streaming platform to control the trending topic among the TikTok community.

On the other hand, Taobao Live and Kuai Shou allow users to choose their most wanted contents. They present a wide range of contents in one screen for consumers to browse and choose. 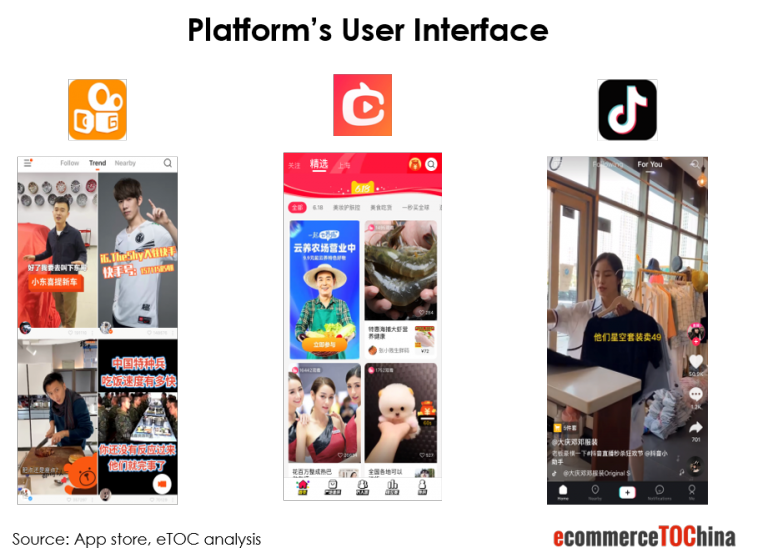 According to Kasi data, male users takes up 54% of all users on Kuai Shou, while only 39% of TikTok users are male. The masculine environment of Kuai Shou platform largely contributed to shape the user preferences on product types. According to a 30-day research on the most popular items, Kuai Shou users are more interested in 3C digital/black technology and personal care products than TikTok users. Men clothes are also among the top 5 product types sold on Kuai Shou, taking up 9% of total sales volume, while TikTok features on promoting boutique women clothes (12% of all sales). 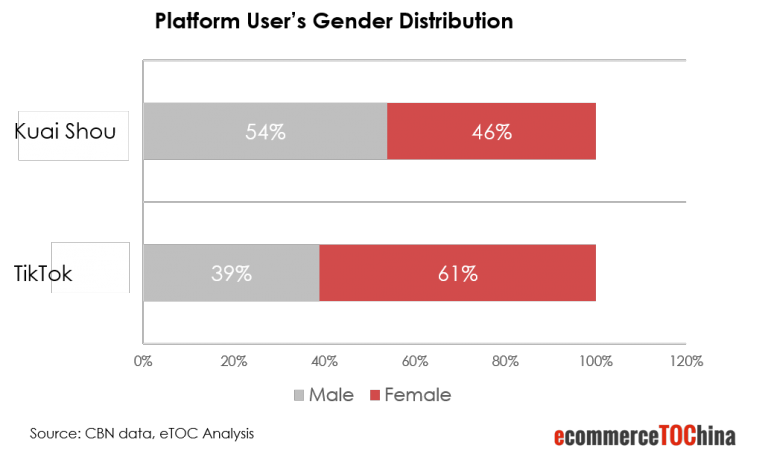 In addition, digging further into the popular men clothes sold on Kuai Shou, research found out that those units are mainly underwear, socks, or warm trousers rather than fancy coats. This indicates that male users on Kuai Shou pay more attention to the products of daily necessary needs; however, exquisite yet not practical products that aren’t appealing to Kuai Shou users, such as sandwich maker and even muscle relaxing gun (for more info on this MRG, please read our previous blog), have a pretty good sales on TikTok platform. TikTok users generally are more willing to spend money on improving their living quality than Kuai Shou users, who try to fulfill their basic needs with balance of quality and spending.

Kasi data also calculated two streaming platforms’ users based on the level of their cities’ tiers. Data reveals that Kuai Shou users are distributed more in lower tier cities, with 65% of users residing in third and fourth tier cities while only 48% for TikTok users. 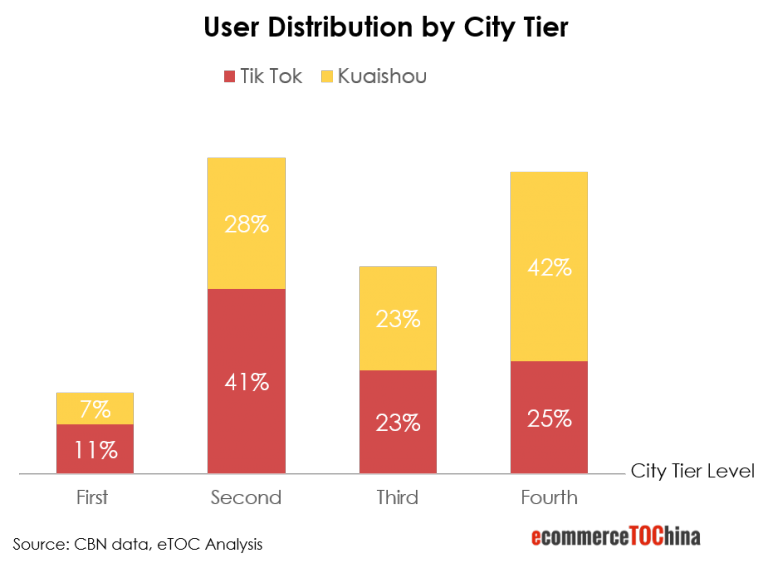 Low tier cities generally have a slower life pace and lower commodity prices than high tier cities, which has a huge impact on users’ consumption power on both streaming platforms. Research on streaming platform’s 30-day performance revealed that 84.6% of TikTok’s top sellers are priced within 200 RMBs. In addition, Kasi data shows that only about 12% of top sellers on Kuai Shou are priced over 80 RMBs.

Like users’ distinctive characteristics on different platforms, the KOLs also carry different styles. For example, most Kuai Shou’s KOLs come from countryside or city of low tiers; they received massive fan base because they authentically present their quality through personal life, whether it’s being honest with fans, promise-keeping with friends, or being optimistic about life. This character has carried out through very grassroot way of expressing. For example, one KOL called “san da brother” gained much recognition from his fans by encouraging the doctors and people who fights Covid-19 fighter bravely and donating many supplies to them. It is their efforts on building their KOL image that build the trustworthy relationship between them and their fans. Therefore, fans of Kuai Shou KOLs are being called as “Lao Tie” in China, implying the deeply bounded brotherhood that fans recognize their KOLs of. Like a community, the emotional bonding is very strong. 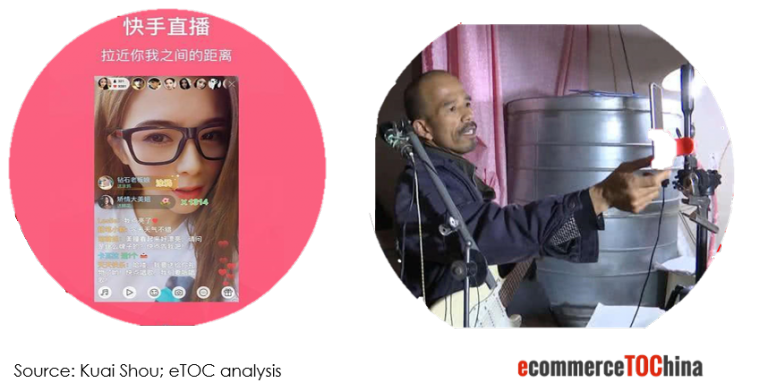 TikTok’s KOLs, on contrast, spend much time trying to generate the most “exquisite” or profession-level of contents. Content made by KOLs is the key focus from the platform’s business model rather than promoting KOLs personalities and build community bounding. The interactive level between KOLs and fans are different in TikTok and Kuai Shou. In Kuai Shou, fans are frequently checking the followed KOLs account page and browsing the contents that the KOLs posted, even the previous contents. But in TikTok, fans are rarely checking the followed KOLs account page and browsing the contents under the KOLs. This is mainly from the user experience cultivated by the platform, which we introduced earlier in this article, fans are so used to watch the contents recommended from platform one after another.

Taobao KOLs used to be shop owners, such as beauty products or clothes. Their former experience in choosing products of good quality largely contributed to their recommendations on live streaming programs, which are recognized by most Taobao Live viewers. 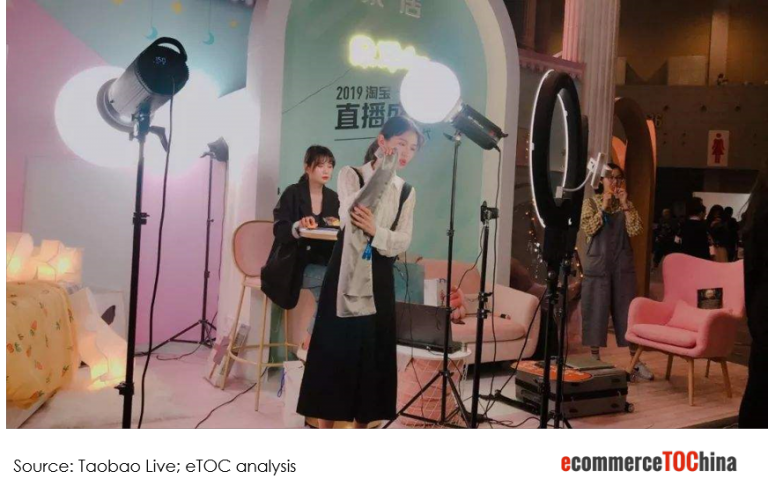 The contents on TikTok generally has the label of being “professional”, and TikTok has strengthened up the “professional” image strategically as professional or educational knowledge became a booming category after Covid 19, audience is not only looking for entertainment but also willing to receive professional or educational contents to learn and improve, live streaming as a tool, the role has been diversified. A few days ago, TikTok created series of programs including “TikTok public class”, “TikTok Hundun university”, and “the gifted” to call experts from all industries to serve the public’s needs for learning, sharing, and communicating knowledge through Tik Tok live streaming. 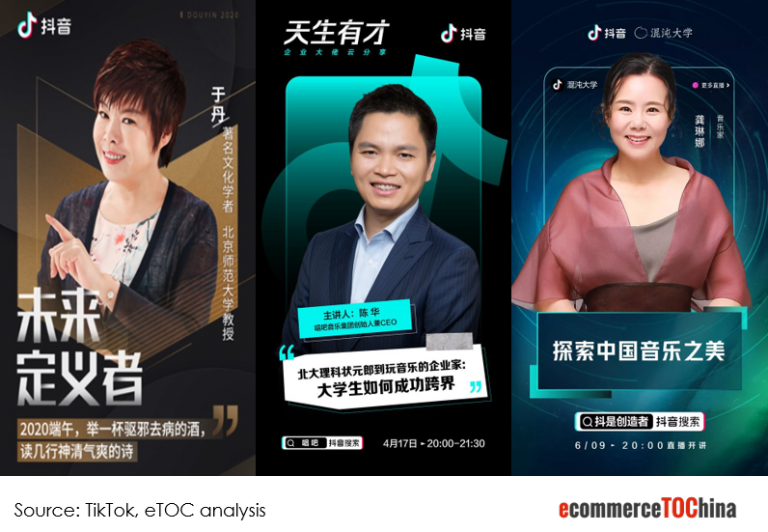 Kuai Shou, on contrast, has more tolerance for user-generated contents. The goal of Kuai Shou app was to provide people from low tiers of cities a venue to demonstrate their life. According to Kasi data, more than 65% of Kuai Shou users have not received college education, which makes it slightly difficult for them to provide professional content as TikTok users do. For example, in June 2020, Kuai Shou Streaming launched the “Life & Us” program with Global Net to demonstrate the original facet of life of normal people from across China. As the CEO of Kuai Shou points out, “The goal of Kuai Shou is to record different facets of human life from a normal people’s perspective. It is to give everyone an equal access and chance to show his/her life.” This program, like a documentary, live streams people’s life. Unlike TikTok, Kuai Shou community is not dominated by some head KOLs but more equally shared by most potential streamers. In this way, the audience will feel themselves being more embraced and established strong emotional bondings on Kuai Shou. 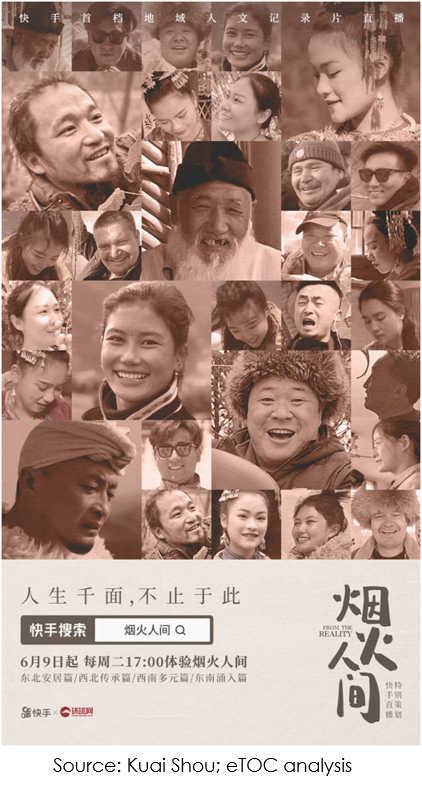 In addition, Kuai Shou interface allows users to choose their preferred contents instead of pushing videos to them; it encourages user-generated content and redirect users to the video’s comment section by swiping down. As a result, Kuai Shou users spend more time on a single video than TikTok users; it is not the professionalism but the content’s authenticity and the emotional connection with the KOL that wins over the users’ heart.

As analyzed before, each platform holds a unique strategic positioning that differs from each other, so the core user profiles and their behaviors as well as the form of contents are different from each other.

Apparently, there are much we can do from live streaming now other than just shopping. Consumers are spending more time staying with live streaming for entertaining and get life inspirations.

Taobao Live is the most direct channel to sell products with competitive price to enhance impulsive purchase; TikTok live streaming is trying to strengthen an image of professional knowledgeable contents more entertaining and meaningful, Kuai Shou live streaming keeps demonstrating and celebrating normal people’s life where normal grassroots can get a bonding and sense of belonging.

So how should we choose them to maximize the brand benefit?