Content marketing differs from traditional marketing in its approach. Instead of focusing on advertising products and services from the vendors’ point of view, content marketing’s approach originates from the consumer’s perspective. By identifying a certain group of targeted consumers, content marketers can provide in-depth information that is truly relevant and useful to that particular group.

In short, content marketing refers to a strategic marketing approach, mainly focusing on creating and distributing content that is consistent, relevant, and valuable in order to attract and retain a certain group of previously identified audience, as a means to drive sales.

However, content marketing is not a new concept. The earliest recorded form of content marketing was observed in 1895, when the heavy industries corporation John Deere launched the world’s first customer-oriented magazine – The Furrow. Soon after, tire manufacturer Michelin developed its Michelin Guides in 1900, showing their customers the basics of car maintenance as well as lodging reviews; later evolving into the world-renowned Michelin Star restaurant rating system of today.

Various studies and real-life cases have shown that content marketing-oriented campaigns have enjoyed a great deal of success.

There are four key reasons for companies to engage in content marketing:

These first three reasons are summarized as “sales, savings, and sunshine” by the Content Marketing Institute’s Chief Content Adviser Robert Rose and the fourth reason as “subscribe, win and grow” by the Institute’s expert Joe Pulizzi.

Starting with increased sales, the goal of any content marketing campaign is to drive demand through the creation or discovery of subscribers that fits the target audience for the products and services of the company running the campaign. These subscribers are then converted into paying customers through engagement via the content marketing campaign, thus increasing sales. The key of this first step is to round up consumers who can resonate with the company’s products and services, at least on some level, but are not yet ready to purchase. By building engagement through relevant content, when they are ready to make a purchase, their first choice would obviously be from the campaigning company.

Cost savings should be the next goal of our content marketing campaign. This goal can be realized through putting the company’s advertising budget to better use – instead of putting up adverts in major areas carpet bombing style as done in traditional marketing approaches, using engaging content to target relevant consumers can often achieve multiple marketing goals as well as give rise to more efficient conversions. For example, the food processing giant Kraft Foods launched a series of magazines called Kraft’s Food & Family, featuring recipes and similar content, and then linked it with their massive online recipes database. This reportedly generated four times the number of subscribers at a fraction of the cost compared to traditional marketing campaigns as most content was user generated. 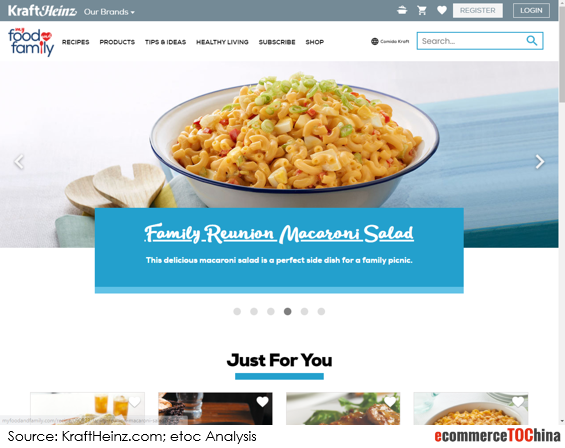 Then comes the sunshine; referring to the growth goal of content marketing. This goal is all about creating better customers for the business. What it really boils down to is creating increased loyalty, and thus retention, with customers, leading to increased positive customer traits such as cross-selling and/or up-selling.

Red Bull, in 2015, was a leading sponsor of the Formula One events. By leveraging its position and influence, the company launched an event-related magazine that was published immediately after each race; this was achieved by bringing a Heidelberg printing press directly to the races. The magazine started out with just race related content, such as race results and interesting facts on the racers, but later evolved into a full-fledged Men’s Lifestyle publication in 2017, rebranding as the Red Bulletin. This new publication was launched in 5 countries, focusing most of its content on international topics, with some localization for each region. As of 2020, the Red Bulletin is in over 10 countries, translated into 5 languages and has 550,000 paid subscribers – effectively transformed into a profitable business unit in and of itself. 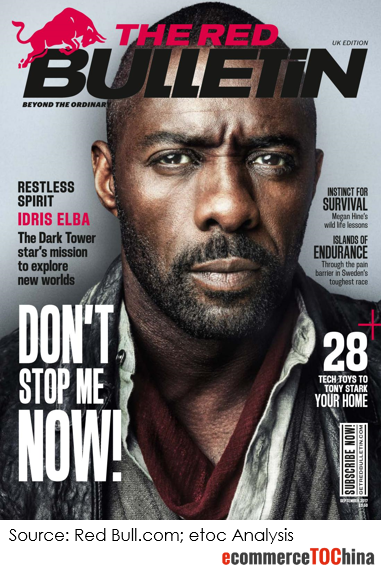 When it comes to content marketing, there are several viable channels or mediums. These channels have been evolving since the 1990s.

New marketing channelexpansion through the ages:

Out of the myriad of marketing channels, some of the popular ones in China include:

We shall focus on the Douyin platform for the rest of this article.

Douyin is a short-video entertainment platform developed by the world’s currently most valuable unicorn, Bytedance Ltd in September of 2016. As of 2020, Douyin has a DAU of 600 million, and over 22 million active content creators. Out of the 600 million DAU, over 70% are between the ages of 19 – 35, whilst over two thirds are female.

Douyin features a unique video recommendation system that lets its users browse endlessly in its vast library of contents. This video feed recommendation algorithm sets it apart from similar western apps as it automatically “pushes” videos to its clients instead of links to a selection of videos. Its core algorithm is vastly complex but in layman’s terms it can be simplified as the following:

Additionally, since 2018, Douyin has integrated ecommerce into its functionality – giving its content creators the ability to create hyperlinks in their content that links directly to Douyin’s internal estores and/or other popular ecommerce platforms; letting its users make purchases seamlessly with just a few clicks.

These above features have effectively set the stage for Douyin to become the perfect platform for content marketing in China, as it has the potential to achieve all of the goals of modern content marketing mentioned in the previous sections.

Given its solid foundation of active users and content creators, Douyin is an ideal medium for content marketing campaigns. As like any other entertainment focused platforms, most people go on Douyin to consume content. By creating engaging and relevant content, brands can quickly grow their followers before worrying about conversion and sales – these will come naturally in due time. Simply put, the number one priority when starting a content campaign on Douyin is to amass followers.

Interesting and engaging content that is relevant to the theme of the products and services that our company wants to sell is the basis on which our campaign is built.

For example, the cookware manufacturer Zwilling uploads cooking vlogs filled with a myriad of interesting recipes and cooking tips featuring their products. 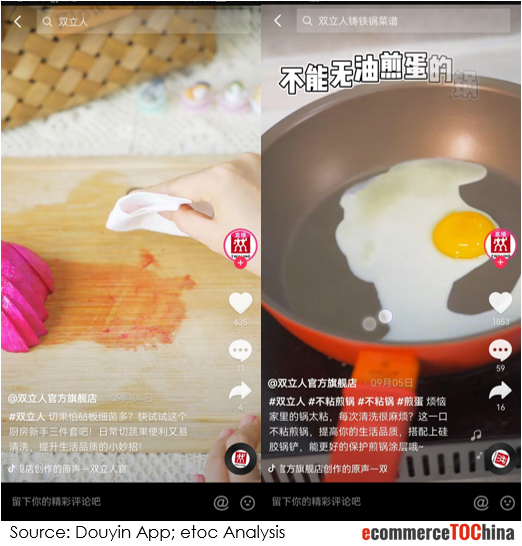 Viewers who are interested in cooking and kitchen related content will be directed to Zwilling’s uploads automatically via Douyin’s preference algorithm. By being content focused, this strategy stands to achieve all of the content marketing campaign goals mentioned in the previous sections.

KOL refers to Key Opinion Leaders, or influencers, who host streams with various contents, ranging from day-to-day vlogging to commercial promotions. The latter is what we are interested in since KOL marketing works extremely well in China. The influencers engage with their followers, by developing a relationship and making themselves relatable. They have an ability to make things trend and that is an opportunity that foreign brands should be looking to invest in.

KOC refers to Key Opinion Consumers, unlike KOLs, these are just normal consumers who share their feedback. They are usually not affiliated with any brand nor have much to gain from their posts; they are just normal people like you and me that just happened to use the products advertised and are giving their review, formed solely from their own opinions. Therefore, whilst not having the degree of influences that KOLs have, KOCs are often perceived as more trustworthy.

WOM refers to Word of Mouth: it is incredibly important in terms of consumer decision making in China — 20 to 50 percent of all purchasing decisions are influenced by it. In 2018, the KOL market value was about 102 billion yuan according to Weibo big data.

KOL and KOC can help brands by co-creating content or directing their followers towards the brand.

Once a healthy follower base has been established, the potential for conversion starts. This conversion is done on Douyin through two channels: the first is via estore purchases mentioned in the previous sections and the second is through live-streaming sessions hosted by KOLs, brands’ own influencers or celebrities.

Livestreaming is revolutionary in sense as it enables marketers to engage in a two-way interaction with its target. During these commercial livestreams, interactions with the audiences is quite high and the marketers can continuously engage in an active feedback loop with their audience, giving them the option to make continuous adjustments on the go. Furthermore, observations show that livestreams often take the prime spots in social media feeds; with reports of users receiving 200% more notifications for livestreams compared with other activities.

Going back to the Zwilling example, Zwilling uses a combination of celebrities and KOLs to promote their products during live streams. Products highlighted during said sessions often enjoy limited time discounts, prompting viewers to purchase.

Content marketing has existed for over a century, and through this time, it has evolved into a powerful, effective and efficient tool that is undoubtedly necessary for brands of today to thrive. By combining the goals of “sales, savings, and sunshine” as well as “subscribe, win and grow”, content marketers worldwide attempt to capture subscribers, save on campaign costs whilst achieving sales growth.

In China, content marketing is even more relevant as its ecommerce and mobile commerce sectors enjoy unprecedented growth year over year. Of which, a top tier medium is Douyin. Therefore, it is of utmost importance for brands to engage in meaningful content marketing campaigns through the creation of engaging content as a base, and leveraging the influences of celebrities, KOLs and KOCs to create hype and positive WOM, as a way of increasing its subscribers and ultimately achieve increased sales with the best efficiency.