Baidu was founded on the 1st of January, 2000, in Zhongguancun, Beijing. It’s founder, Li Yan Hong, holds the patent for “Hyperchain Analysis”, making China a part of the only four nations (along with USA, Russia and South Korea) in the world with core search engine technology.

Every day, Baidu processes over 1 billion search requests from over 100 countries and is the primary source of Chinese information and services for netizens across the world, serving over 1 billion users.

With its search engine technology as the foundation, Baidu has over the years branched out into many different but related sectors, such as voice, image and content recognition, natural languages processing, AI technology and etc. In the recent decade, Baidu has been steadily investing in the areas of deep learning, AI interactive speech operating systems, self-driving vehicles and AI microprocessors, setting the stage for the company to becoming a leader in AI, whilst having a solid foundation in internet technology.

Comprehensive, multi-scenario and massive user-generated traffic: Baidu Marketing relies heavily on its user-base advantage; billions of search requests processed, with over 100 million users browsing Baidu’s information flow, and over 80 billion positioning service requests every single day. With this, Baidu Marketing can provide its customers with a full range of product advertising resources, covering all aspects of a typical users’ daily life.

AI technology simplifies advertisement delivery: Baidu Brain, is a product that tracks user behavior in real time. It uses algorithms to recommend creative adverts which are based on contents that the user has viewed, and then automatically update and deliver adverts to designated users, saving quite a bit of advertisement operations costs for Baidu Marketing’s customers.

Precise user targeting for adverts： With the help of Baidu’s top-of-the-line search engine and information flow algorithms, Baidu Marketing is able to accurately paint user portraits with over 2 million characteristics based on behavior data, and model each user’s real-life characteristics.

2. What is Baidu Marketing

Baidu uses its search engine technology in conjunction with information flow as a dual propagation system, accurately homing in on customers. 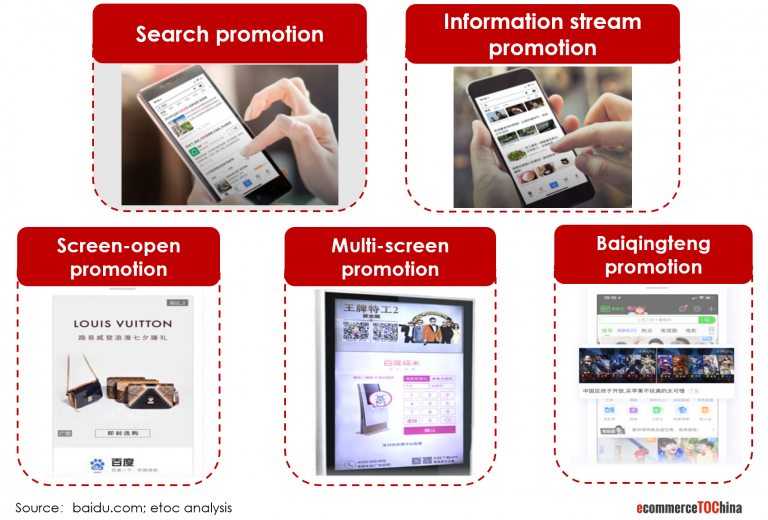 Search marketing is based on Baidu search, the world’s largest Chinese-language search engine. It displays customer marketing information in prominent positions in the search results window.

Billing is done on a per-click basis: only when users click on an advertisement link, Baidu Marketing’s customers are billed. 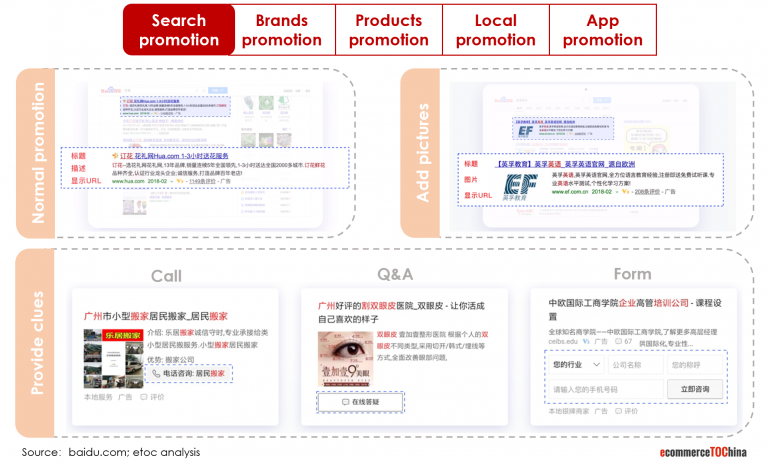 The Baidu Brand Zone is located at the top of Baidu’s search results page. It occupies the most prominent space and uses a combination of text, images, videos and other forms of adverts to display information related to the customer’s brand. It enables netizens to quickly and conveniently learn about the brand and hyperlinks to the brand’s official websites are present when available.

This is an innovative brand marketing model that enhances the efficiency of corporate brand marketing. The Brand Zone will appear when users’ searches trigger specific keywords.

Whilst users are in a potential demand stage, customers can place related adverts in places like Baidu Knowledge (Similar to Yahoo Answers). A dedicated question page is generated by answering questions, which will be displayed on the search results page and the Baidu Knowledge page. When the user browses for answers in Baidu Knowledge, they will unknowingly browse adverts as well.

Brand exposure can be increased by displaying brand advertisements on the right-hand side of the search results page during the user interest stage.

During the user conversion stage, customers can insert their relevant product information in Baidu’s search results in the form of structured graphics and text. This will increase brand marketing and sales conversion; 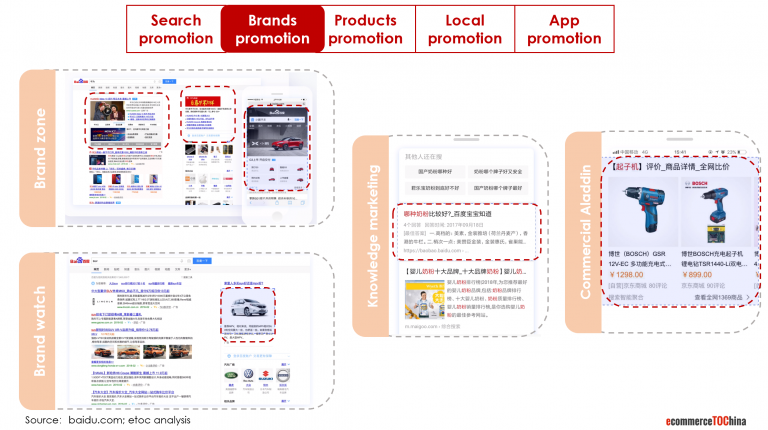 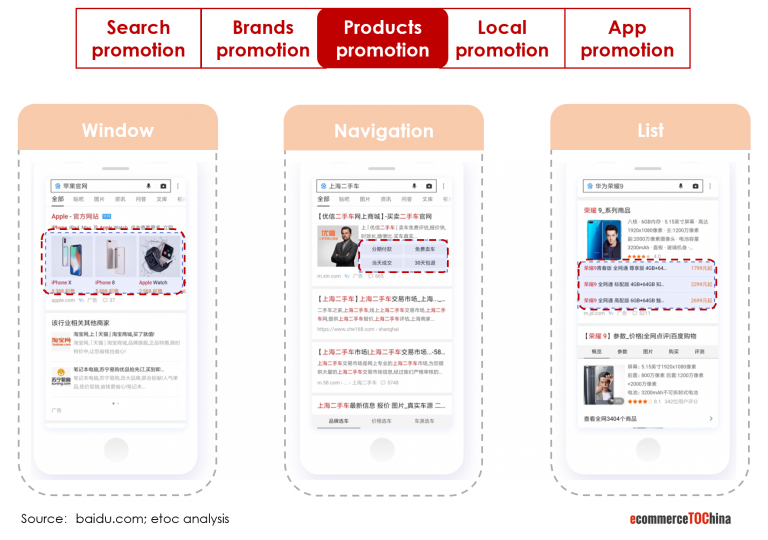 Through the integration of mobile Baidu search and Baidu Nuomi resources, the Bendizhitongche (Domestic marketing tool) can accurately promote customer product and services to nearby users with corresponding needs, and prompt users to complete transactions online and/or in-store. 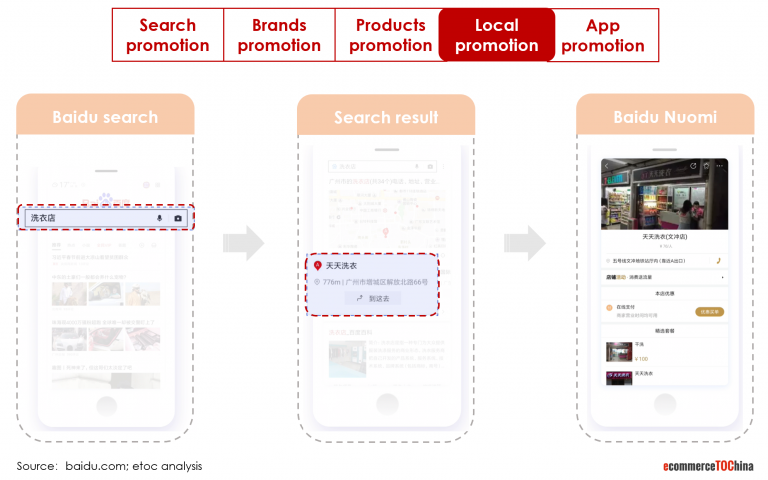 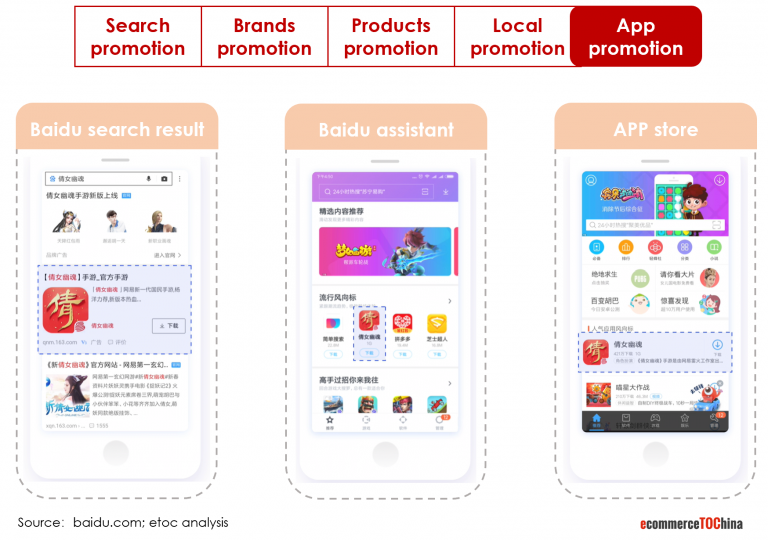 Volvo’s first purely electric vehicle, the XC40, was unveiled at the Beijing Auto Show in September 2020. However, the attention generated was not impressive at all. Under these circumstances, Volvo put in the effort to invite celebrity Hua Chenyu as their spokesperson to promote the vehicle, officially starting their cooperation at the Guangzhou Auto Show launch in November. This case will demonstrate how a spokesperson is used to attract attention.

In order to convert celebrity-oriented attention into Volvo-oriented attention, Baidu targeted celebrity followers through multiple dimensions, vividly highlighting interactions between the celebrity spokesperson and the vehicle in a video-based innovative style marketing campaign, as a means to arouse attention through three stages: “inspire-demonstrate-continuously attract”.

Taking advantage of celebrity follower traffic, announcements for the XC40 launch are pushed to celebrity followers and fan groups to increase the promotion of the new vehicle. At the same time, through a differentiated approach, official announcements for XC40 launch are pushed towards Volo’s followers and enthusiasts as well. On the wireless side, through Volvo’s Baijia account, launch and other relevant information regarding the XC40 is regularly published to attract and update followers. On the webpage side, the main focus is on Visual experience, through Volvo’s new video-based contents and dominant official brand TVC adverts, Volvo aims to enhance users’ click willingness.

During the launch period, Volvo chose Map Travel and Baidu App Information, two high-traffic applications used by automobile owners/potential owners, to campaign for the launch in a comprehensive video format. Among them, the Baidu App utilizes an information flow open-screen advert with hyperlinks to the product. This has two major advantages – immersion and long exposure; giving users a more vivid brand perception and effectively driving click willingness. At the same time, the launch also took the lead in testing out a combination of open-screen adverts in conjunction with core advertisement space usage (the blank space right under the search bar in the Baidu App) to enhance brand awareness.

During the launch period, with the search + push dual-engine system as a foundation, making full use of celebrity influence as well, attract users with graphic and video content. At the same time, using a combination of information flow GD+CPC to achieve integration of quality and efficiency. 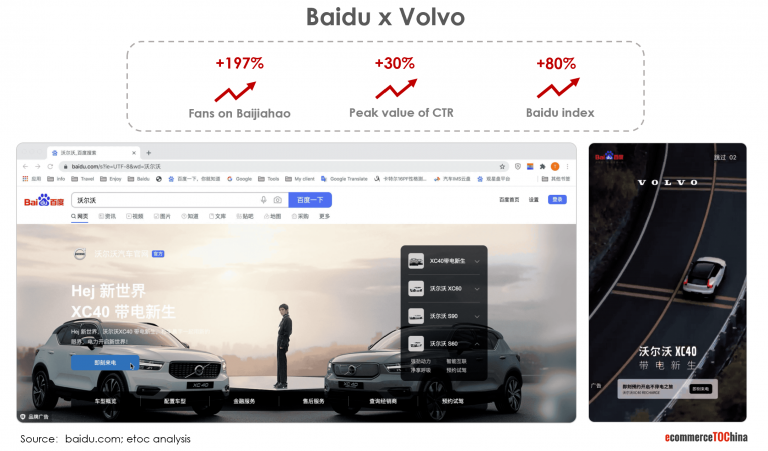 After Volvo XC40 was officially launched, through integrated marketing and video-based innovative marketing, efficiently taking advantage of endorsement traffic to drive growth, Volvo has achieved groundbreaking results: its Baijiahao fans increased by 197% during the launch period, and the XC40 Baidu index number increased by 80% compared to pre-launch; higher than one of its competitor’s, the Lincoln Navigator’s, Index number by 2.4 times!