Launched in 2015, Pinduoduo has been now a leading social e-commerce application and one of the fastest growing platforms in China.

Its users are drawn by deals on a wide range of good which include things like clothing, fresh productsm electronics, as well as common household necessities like tissue paper.

2. How Does Pinduoduo Attract Millions of Users?

When Pingduoduo was starting out, there was a shift in the Chinese e-commerce landscape. Previous group buying platforms simply sold discount coupons. It wasn´t a real group buying action. Pingduoduo has shifted group buying into another new era.

When buying things from Pingduoduo, shoppers are presented with two price options: a standard price and a discount price. In order for users to unlock heavily discounted prices, they have to form teams of at least two buyers. This created an incentive for shoppers to share deals with others. Shoppers are encouraged to persuade their friends to join their purchase via social platform, WeChat, QQ (two biggest chatting application under Tencent, similar to WhatsApp and Skype), and QR code scanning in order to get the discounted prices through the team purchasing.

It utilizes the social networking to connect like-minded shoppers and various gamifications to draw so many users gradually addicted to the platform.

The Daily Check-in mechanism is to encourage users open the apps everyday with the redeemable points reward which can be deducted in their item purchasing. 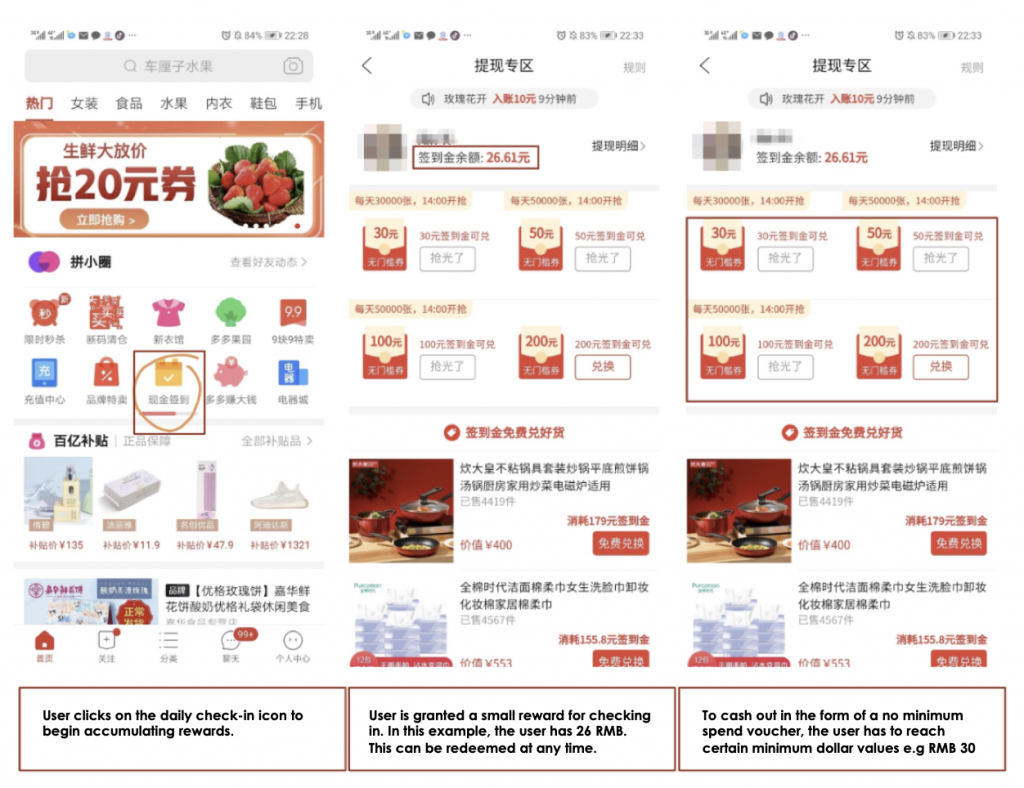 The Price Chop mechanism encourage users to get the items that they want for free by sharing with their networking within 24h.

Upon selection, a 24-hour timer begins. To get the item for free, the user must share their link with as many friends as possible.

Every friend that clicks on the link (no purchase required) drives an incremental discount for the initiator.

If you don’t reduce the price to 0 within 24 hours you don’t get the item for free and you have to start all over again. 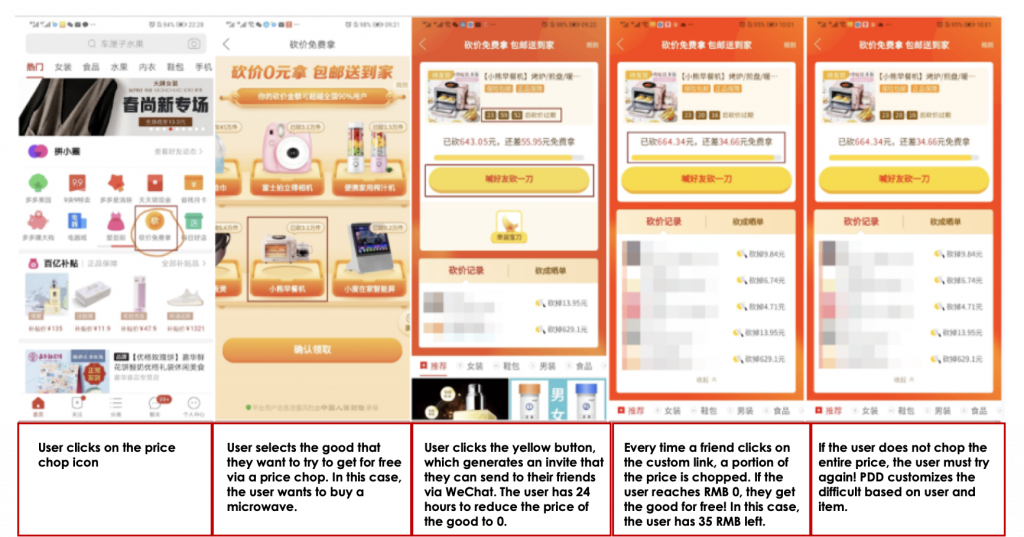 Member Card are different kinds of the rewarding, aiming to help users save money via vouchers or special discount by sharing amongst their friends.

There are three main cards:

The Free Pass Card enables users to enjoy the group-buying discount without having to form a team. Users usually get one Free Pass Card after completing two purchases on Pinduoduo.

The Brand Black Card is aiming to encourage the users leave comments on the items they purchased and offer them with the discount on branded products in return. After 2-4 reviews completion by a user, the Brand Black Card will be granted.

This is important for the platform that most of the Chinese consumers reply heavily on the reviews and recommendations of the items from the existed buyers to make decision.

The Brand Card is aiming to promote the branded products on the platform.

Users will get one Brand Card after they purchased a branded item, and they can alternatively share with their friends to attract them browsing and ultimately purchasing the branded products. This is an effective incentive for the platform to promote its branded products. 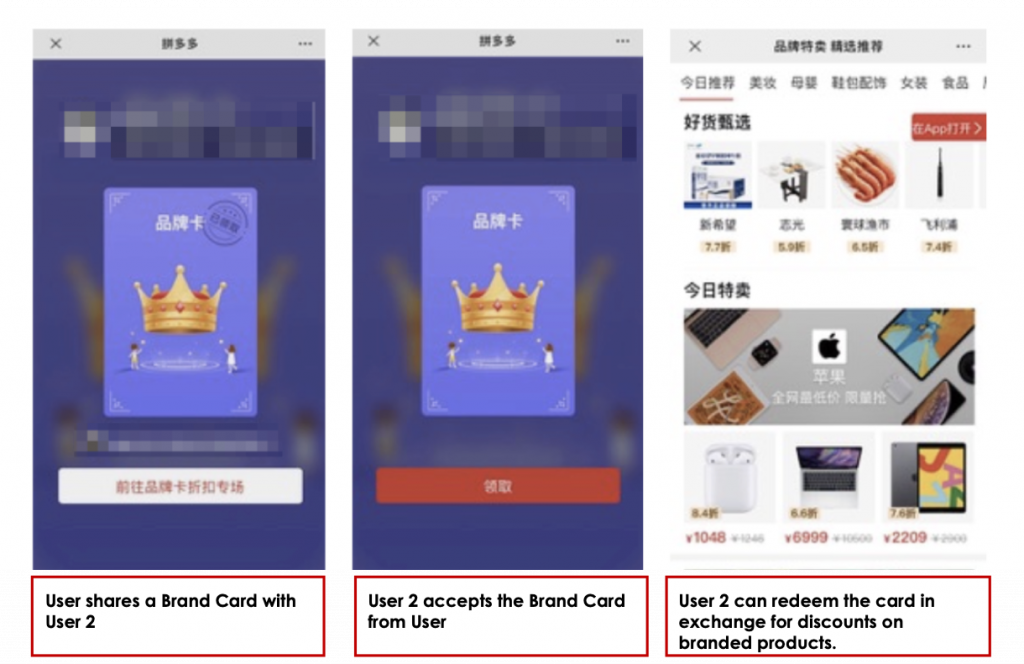 The Mini game is an in-app games to allow users enjoy playing the online game beyond purchasing.

The in-app game is aiming to mimic a real shopping experience for the users in order to maintain as longer as the user retention.

Duo Duo Orchard was the first popular game on the platform, users can grow virtual fruit trees, collecting water droplets to water their tree by shopping, browsing, and interacting with other users on the platform.

The more you shop on the platform the more water droplets you receive, or team purchases and sharing items alternatively enable users to obtain special tools which are accelerating the growth of the tree.

In return, users will receive free fruit from Pinduoduo after the virtual tree reaches its maturity virtually.

3. Difference between Groupon and Pinduoduo

The unique value of Pinduoduo mostly lies in its strong user engagement which differentiate itself and Groupon. The group buying model though is not just financial stimuli, besides, Pinduoduo utilizes the group buying model as its social incentives to encourage consumers to help them expand the user base through social platform sharing.

4. Why Pinduoduo grows the fastest?

4.1 WeChat facilitate Pinduoduo with its huge data base

Tencent, the parent company to WeChat, led Pinduoduo’s Series B, is one of the largest shareholders in Pinduoduo, it enables Pinduoduo to use WeChat as the main sales channel via which Pinduoduo can access easily to the huge amount of user data and is able to apply into the product recommendations, pricing and product roadmap.

WeChat mini-program function is crucial to Pinduoduo. As much as 65% of the Pinduoduo’s transactions are completed through its WeChat mini program. Pinduoduo makes it seamless that without having to download its app, users could directly share the items with do not even have to leave the WeChat app throughout their entire ordering process. Later in 2018, Pinduoduo has also started to incentivize users to go to the standalone Pinduoduo app, over 60% of active users have come from and rely on Pinduoduo’s WeChat mini program.

The combination of featuring both e-commerce and social sharing creates a new social life for Chinese users that they can purchase online items by engaging with the social groups and team purchasing. Chinese society is generally more collective in cultural, and since fake products are frequent occurring in Chinese e-commerce, approximately 50% of the customers are more likely to purchase products recommended by family and friends (source from Frost & Sullivan and Azoya Consulting). Therefore, a social chat platform like WeChat acts as a crucial weapon for Pinduoduo to build a good “word-of-mouth” and ultimately facilitate the social sharing function. This function also helped Pinduoduo to displace Taobao from the No. 1 position of e-commerce apps in just two years.

Just image that when you have a friend who invites 200 friends in 20 minutes and you can easily buy the item which you want in a relatively cheap price, isn’t it a win-win deal for you and the platform?

Driven by sharing on WeChat, Pinduoduo’s average customer acquisition cost is only $2, compared to $39 and $41 for primary rivals JD.com and Taobao.  But even more impressive is its 7-day retention rate of 77%, the highest of any e-commerce platform in China.  This retention comes from the continuous re-engagement at the prospect of winning deep discounts.  It’s the combination of the viral acquisition loop and the addictive shopping experience that has caused Pinduoduo to become bigger than eBay in just four short years.

Pinduoduo’s growth came from an existed crowded Chinese ecommerce environment, dominated by Alibaba and JD.com. Apart from its partnering with Tencent, another strategy is to compete not head-on with incumbents, but to target rural and peri-urban consumers with an alternate value proposition, which maximizes trust and in so doing reduces the cost of goods. Let’s take a look at the user demography.

In the first half year of 2019, rural China added 3 million more internet users which accounted for a total number of 225 million, 26.3% of the country’s total internet population of 854 million (source from rural ecommerce development by China International Electronic Commerce Center). Pinduoduo has captured this chance which helped boost itself through the rural online sales.

Pinduoduo’s main users from these low-tier cities earn less salaries, they also spend less on housing, leaving them income available for frivolities. Unlike their urban counterparts, consumers from rural areas also have less entertainment options, they are more willing to collect discount buddies, participate in sweepstakes, and join online virtual games as their social entertainment life. Many of Pinduoduo’s users only became internet users in recent years, and use the app not only for shopping, but as a way to spend their free time.

Besides, elderly retirees’ community in China has showed especially loyal to Pinduoduo. They may not have a lot of money to spend, but they want to take part in the national pastime and, on the way, offer their family members discounts as a way to combat loneliness.

Moreover, one typical group of people, Chinese Dama (Mandarin:中国大妈, literally ‘Chinese Aunties’) cannot be neglected for their characters of super-strong bargaining power. They are budget-savvy shoppers most eager to snap up a good deal as they are the main family consumption maker. And along with the convenient of the internet, Chinese Dama have been increasingly aware of how to “party” and enjoy the team-up bargaining shopping. They will not miss any good opportunity to make money as well as keep their eye with scoring bargain-basement prices on everyday items.

Pinduoduo is literally recognized as a consumer-to-manufacturer (C2M) model, consumers create value for manufacturers and provide merchants ideas for the production according to the consumer demands.

From the original form of the C2M model, Pinduoduo supports merchants especially local agricultural farmers to bridge the gap by connecting producers directly with the consumers, without relying on layers of intermediaries in the traditional supply chain. The big data and AI of the platform enables manufacturers to pinpoint the customer needs and preferences which ultimately to produce in a reasonable quantities of end products.

To be more precisely, Pinduoduo used group buying model to aggregate demand from its more than 600 million platform users for agricultural produce, helping farmers sell the perishable vegetables and fruits, which remaining a key category on the platform. 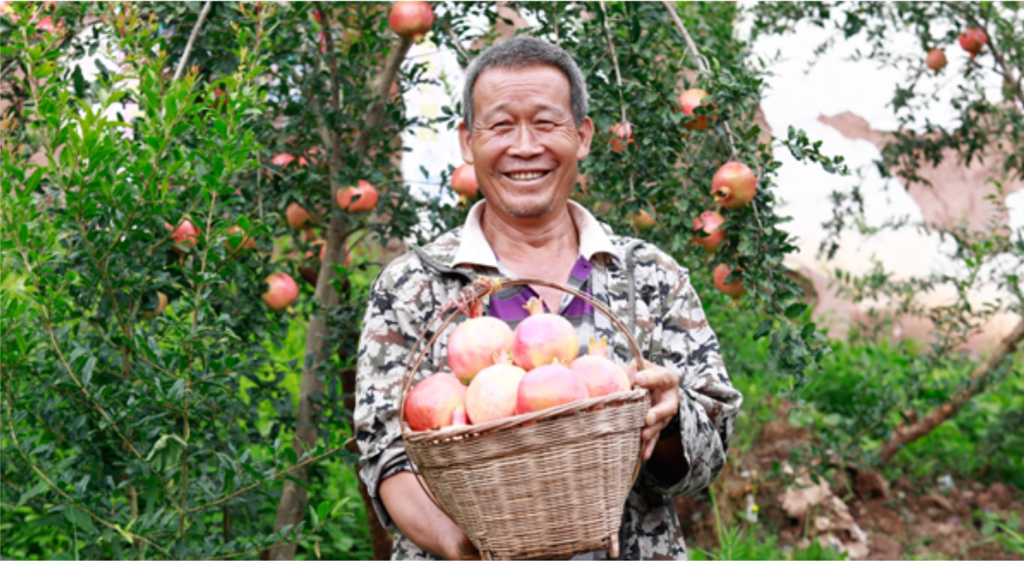 In order to upgrade the agriculture production matching with the demand, Pinduoduo recently partnered with the China Agricultural University and the technical support from the Food and Agriculture Organization (FAO) to invent the Smart Agriculture Competition (a globally agriculture program), using the latest technologies and digitalization to flourish the domestic agriculture sector.

Moreover, this direct-to-consumer model indicates to cut out the middlemen and further deliver price savings to the customer, which in turn generates more demand and economies of scale.

To sum up, Pinduoduo has proved itself as one of the most successful showcases of how an e-commerce application designed from the ground up to engineer social sharing, viral engagement and repetitive group buying as part of the user routine life.

We have summarized Pingduoduo´s success factors as follows:

Want to have a first free consultation session about e-commerce and digital marketing in China? Contact us.