With the online shopping market valued at an estimated $1.2 trillion, China is an e-commerce behemoth filled with emerging trends and an unsatiable demand for increasingly more convenient and faster payment methods.

In recent years, China’s large population, in conjunction with its rapidly growing digital technology penetration allows for its e-commerce sales to increase at an incredible rate. However, since internet and smartphone access, which stands at 54.6 percent and 56 percent respectively, are still relatively low by global standards, according to JP Morgan Research (JP Morgan Payments Trends, 2019), online sales are predicted to further increase with plenty of as-yet-untapped potential consumers to court, which suggests that the online payment market will further grow, albeit at a slower pace, in the immediate future. After the Covid-19 epidemic in China, online payment, mobile payment and QR code payment have become primary payment choices as to observe social distancing regulations.

Considered as a nation of smartphone enthusiasts, besides e-commerce, China has already been a world leader in the field of mobile commerce (abbreviated as m-commerce). Almost three out of every four Chinese e-commerce transactions are carried out through a mobile device, generating $873.3 billion in sales (TMOGroup.asia). In early 2020, 776.08 million people used mobile payment in China (People’s Bank of China) and over 74% of the population used mobile payment tools every day (iiMedia). 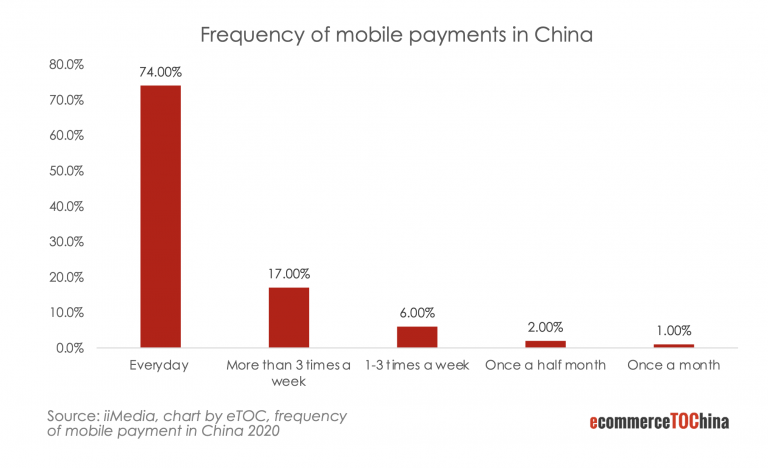 For consumers of m-commerce, the method they research, organize, purchase and browse in their daily lives has been changed drastically by super-apps such as WeChat. WeChat offers a full suite of services, including but not limited to shopping, lifestyle, entertainment, and payment.

Adopted quickly in China, digital wallets are now used to pay for the majority of e-commerce transactions with a 54% market share, or $620.5 billion in sales in 2020. Interestingly, contrary to most countries, it seems that China has skipped the credit card era completely and directly went to mobile payment. In fact, the use of credit card in China is sporadic, if not non-existent. In 2019, credit card penetration per capita is only 0.38 and just 21% of e-commerce transactions were carried out by card, while 54% were through digital wallets (JP Morgan Payments Trends, 2019). 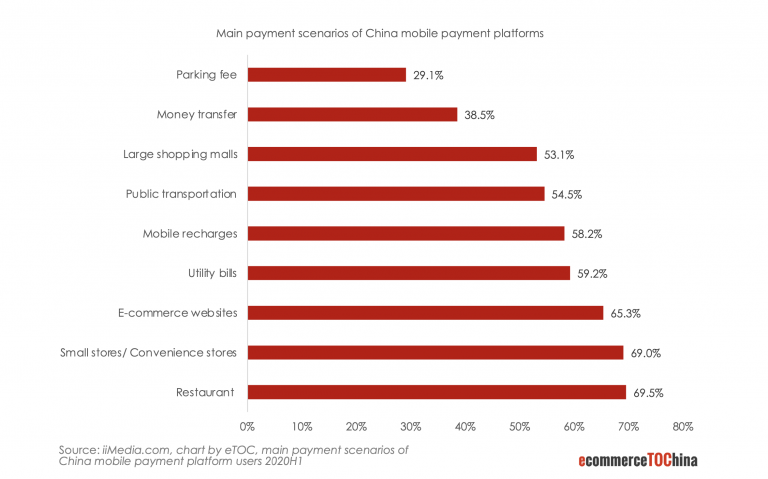 While Apple Pay is asking vendors to purchase proprietary technology, QR codes printed on billions of pieces of paper have made mobile payment one of the new “Four Great Inventions” of China.

The success of mobile payment in China can be greatly attributed to the QR code which even street musicians use to receive money. There are two ways to pay via QR Codes. 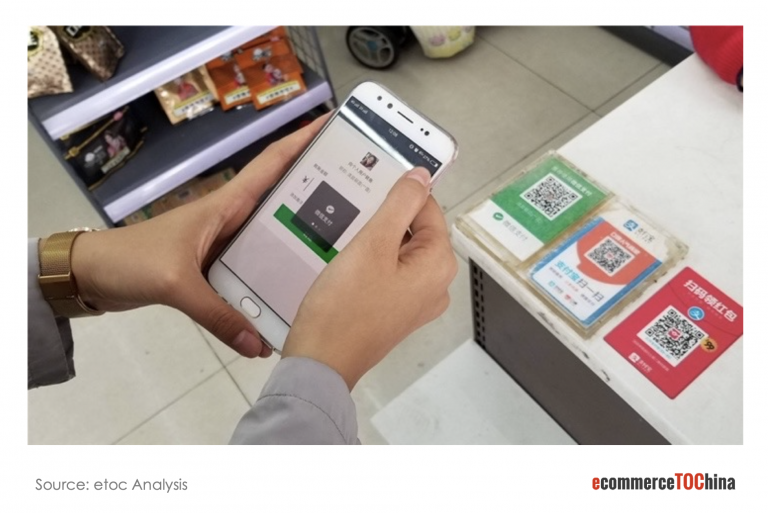 WeChat Pay and Alipay are the most two widely used digital wallet Apps that entered this market early and has since gained a large number of users with their mature e-commerce and social ecosystems.

Other mobile payment platforms also have their advantages of exclusivity and high user loyalty; examples include Meituan’s Meituan pay. Additionally, in recent years, with the development of biometrics and other mobile technology, facial-recognition payment is also getting popular among offline consumers, allowing consumers to make purchases without using a smartphone. 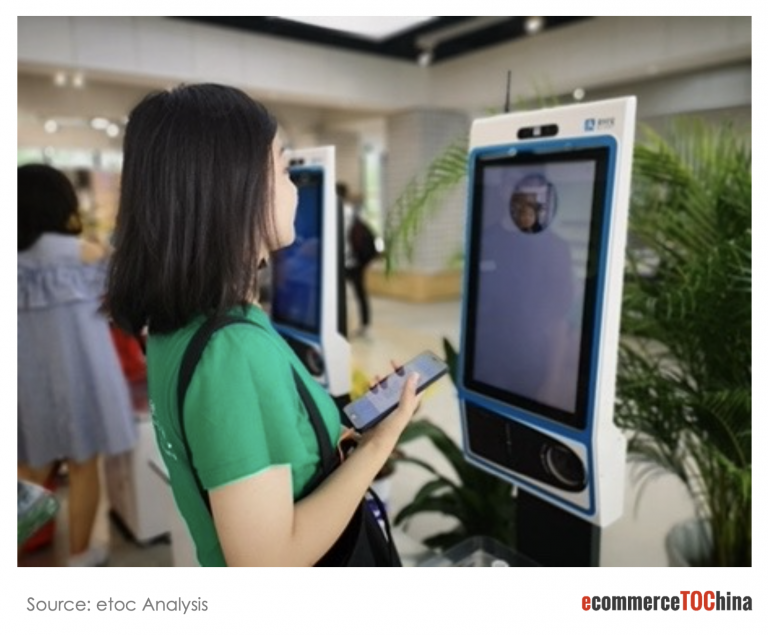 As for specific manipulation methods, both WeChat and Alipay have developed many similar solutions for diverse scenarios and requirements of merchants, vendors, content producers, and even government sectors.

There are two ways to pay via QR codes mentioned in Part 1. WeChat Pay and Alipay often appear simultaneously for customers to scan, the scanners in stores can also identify these two different tools automatically. Particularly, different from JSAPI offline solution to be introduced subsequently, the printed QR Codes to be scan in this way is solid. Users need to input the amount themselves after scanning. However, merchants always turning on the voice broadcasting function or ask customers to show their payments interface to avoid dispute effectively. 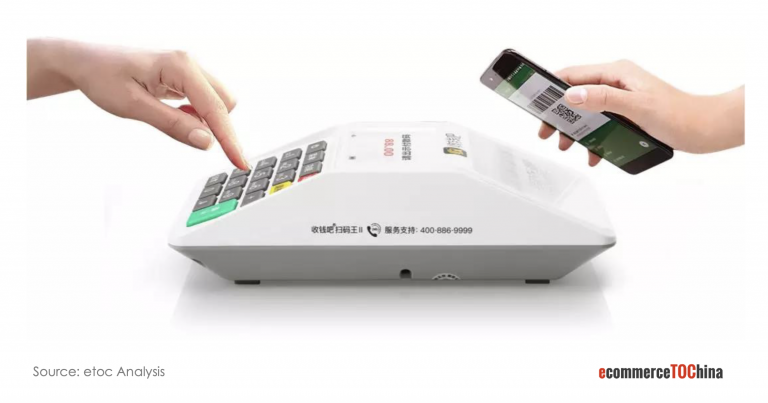 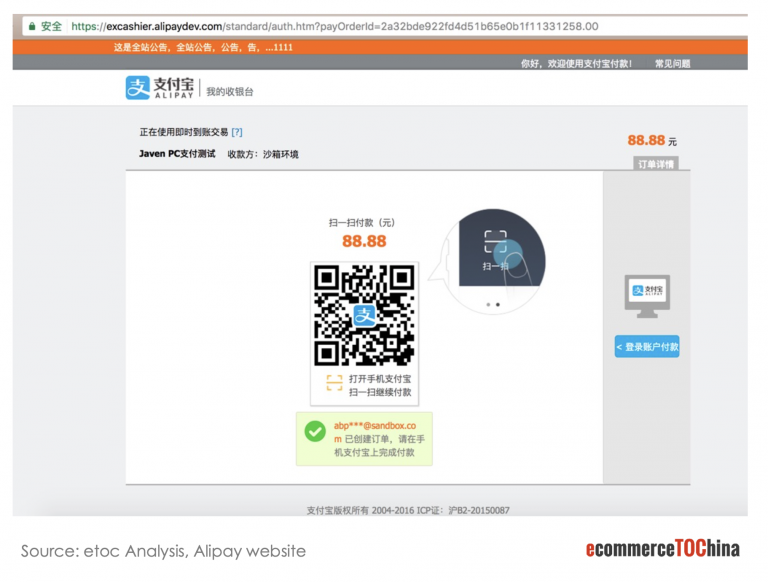 For those developers with their own apps, WeChat pay and Alipay are often available concurrently by directly jumping from other apps to these two giant apps without scanning QR codes.

Apart from those common solutions, different online payment tools or digital wallets have their own features and different organization approaches to connect countless services providers.

WeChat Pay has the biggest market share by penetration rate in China, with 92.7% in 2020. Enveloped by Tencent Company, which owns the most popular social media in China, WeChat, WeChat Pay has become the most used mobile payment solution in China.

WeChat, the most popular instant message application and social media has more than 1 billion monthly active users. Therefore, WeChat Pay can easily cover almost all of the point-to-point transactions in daily life by the powerful social network foundation of billions of accounts. Users can pay all the friends in his/her contacts list just through the chatting interface in two forms including formal transfer and red packet which is a digitalized version of Chinese traditional cash gift. Users could set an amount (less than ¥200) and a sentence of blessing, even design the customized cover pattern of the red packet. 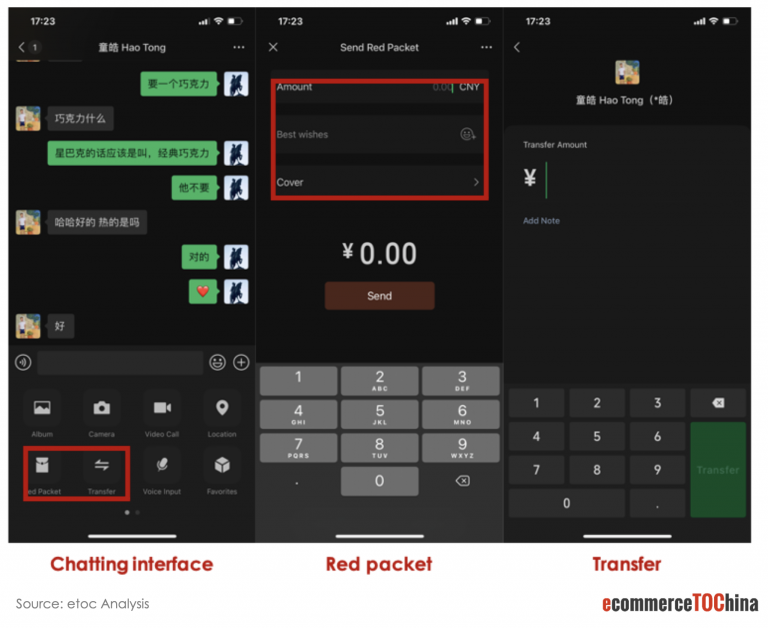 Established as the most comprehensive life service platforms, WeChat mini programs and WeChat public accounts have virtually offered all life services for users, including paying phone bills, utilities, repaying credit cards, displaying health QR codes since the pandemic, even booking hotels, ordering food or shopping via powerful mini programs. For those payments completed in WeChat mini programs, public accounts or some apps in WeChat ecosystem, for example e-commerce giant JD, catering giant Meituan, WeChat Pay is usually provided exclusively. Although some apps have developed their own digital wallets as well with coupons such as JP pay, Meituan pay, WeChat pay still have the cemented status.

Alipay is China’s second largest digital wallet and mobile and online payments platform, responsible for over half of all digital transactions in China. Founded in 2004, Alipay was first built as Taobao’s payment arm. It has since expanded into a full-fledged financial services provider (now Ant Financial Group) with extensive services including large transaction transfer services, credit card bill payments and more.

Alipay was first established as a supplementary financial function of Taobao, the dominating e-commerce platform in China, in order to solve the trust issue between internet buyers and sellers, and set up the standards and rules for Chinese e-commerce ecosystem. Therefore, people have to use Alipay exclusively in Taobao, Tmall and other apps within Ali ecosystem, for example online food delivery platform Ele. Also, Alipay has connected most of service providers and merchants just like WeChat Pay but in different form, mini applications in Alipay app where people have to use Alipay as well.

The second largest feature of Alipay is that people can use various convenient financial services, including making investments, purchasing insurance and many other financial products. Alipay even launched a line of credit product called Huabei. Each registered user can advance their credit limit on Huabei by using it more and more frequently. Like credit cards, Huabei will send out bills each moth and they must be paid with a certain time frame as to not incur extra surcharges. In addition to the “buy this month, pay next month, long interest-free period” consumer experience, Huabei also introduced the function of Ant Installment, with which consumers can repay in 3, 6, 9, 12 months’ installments. According to data in 2020, the yearly active users of Huabei reached 500 million, which further consolidate the lead of Alipay, though there exist other competitors in this credit area such as JD Baitiao. 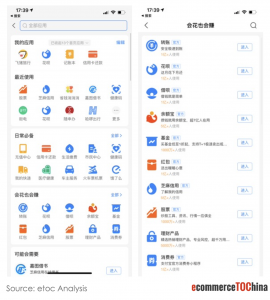 Meituan is a popular Chinese online to offline platform. When Meituan users order food delivery, buying film tickets, making appointment for barber or any other services, they have a range of payment options, including WeChat Pay, Alipay, as well as its own proprietary Meituan Pay. Meituan has wide offline services and offers discounts to users who choose Meituan Pay at online or offline checkout, which results in users getting used to using Meituan’s own payment method directly, instead of third-party payment methods, like Alipay and WeChat Pay.

China Union Pay is the only domestic bank card organization in China, linking the ATMs of 14 major banks and many smaller banks throughout mainland China. It is also an Electronic Funds Transfer at Point of Sale (EFTPOS). Many offline and online merchants offer the option to use Union Pay to handle transactions.

WeChat pay and Alipay also offer cross-border payment services to overseas vendors. When Chinese consumers buy goods from overseas, they are able pay in CNY by the previously mentioned digital wallets. The products’ prices in their local currency are converted into CNY via real-time rates, and shown to the consumers. WeChat Pay and Alipay settles each transaction with foreign vendors based on the price in local currency. Major currencies including HKD, USD, GBP, JPY, CAD, AUD, EUR, NZD, KRW, THB, SGD, RUB, DKK, SEK, CHF and NOK are supported. For unsupported currencies, transactions can be made in USD. The settlement will be completed after T+1 days and T days is the period the settlement amount reaches the set amount.

Besides payment, WeChat pay and Alipay also have the function of automatic customs declaration. Upon merchants’ declaration requests, Alipay and WeChat Pay can extract and transmits to the customs the corresponding payment information according to the transaction and parameters sent through the interface by merchants. 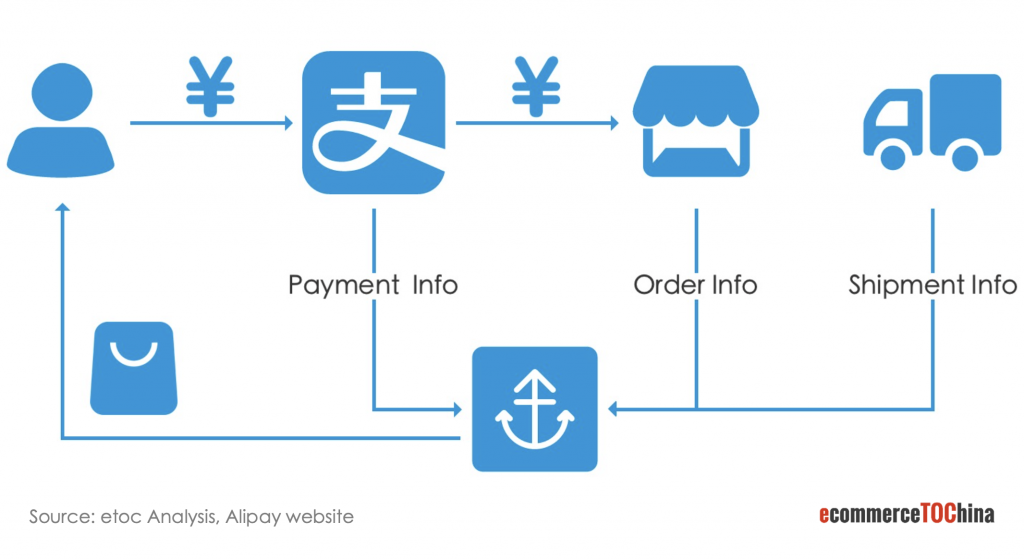 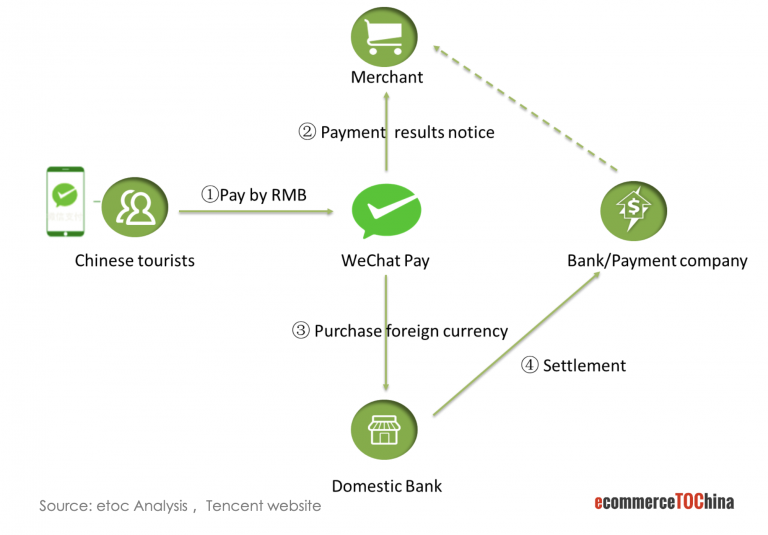 Want to have a first free consultation session about online payment tools in China? Contact us.