Affiliate marketing, an advertising tool in which companies compensate third-party publishers to generate traffic towards its products and services, plays a significant role in the e-commerce economy. Vendors only need to cooperate with affiliates to reach a wide base of potential consumers.

Taobaoke, a type of “effect marketing(效果营销)”, is a network of professionals who offer assistance to brands or vendors by promoting products and services. Unlike the cost per click approach of Taobao Zhitongche, Taobaoke is billed based on completed transactions, known as the cost per sale (CPS) approach. Taobaoke supports the promotion of individual items and shops; meaning that vendors can freely set promotion commissions for any particular item or shop on the Taobaoke platform – Taobao Alliance. Commissions can be adjusted at will within a certain range based on the category of the item/shop being promoted. Posting higher commissions will likely attract more promoters. As soon as promoted items/shops have confirmed transactions, vendors are billed by the Taobao Alliance and Taobaoke will then receive their commission as well. 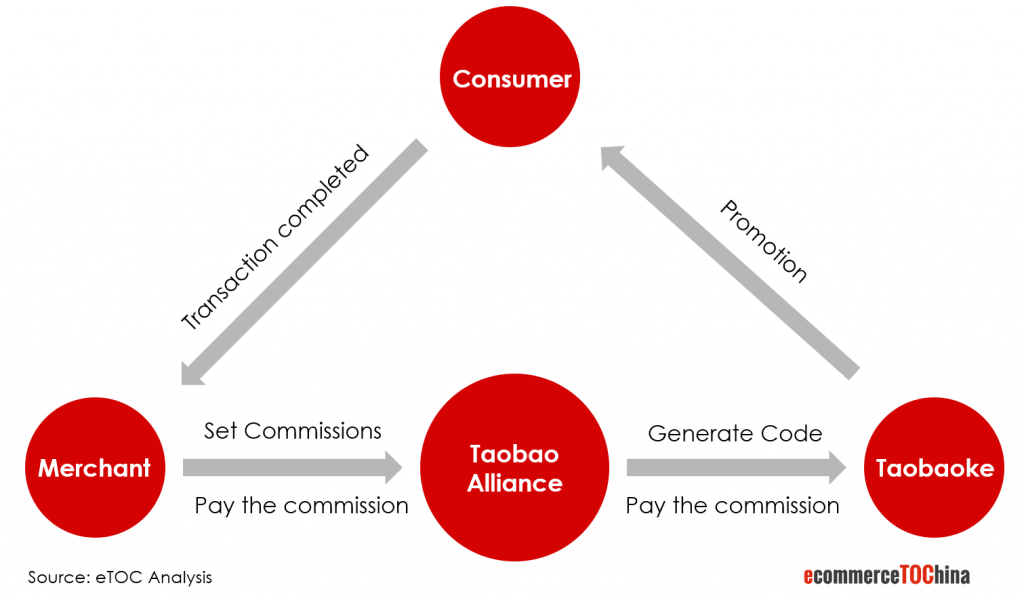 1) Professional Taobaoke are independent promotion platforms. This kind of Taobaoke is best suited towards site-building and professional platforms such as rebate sites, blogs, and shopping guide platforms, earning commissions.

2) Free Taobaoke: Unlike professional Taobaoke, Free Taobaoke don’t have a fixed promotion methodology and usually are not equipped with the ability and knowledge for platform construction. The majority of their presence can currently be seen on Weibo, Red and short-video platforms such as Douyin and Kuaishou.

2. Why should brands use Taobaoke?

1) Taobaoke is distributed everywhere in different industries on the Internet, meaning that a larger consumer base can be reached.

2) Promoters bring more traffic to the store which means more sales could be converted.

3) Unlike the cost per click (CPC) model of Taobao Zhitongche(直通车), Taobaoke uses a cost per sale (CPS) model which generates higher ROI. The overall average ROI of Taobaoke is approximately 6.67%.

4) Commissions are charged only for completed transactions; thus, vendors have a more guaranteed ROI.

5) Once established, Taobaoke promotion channels are easy to maintain, avoiding over-reliance on paid advertising since quality products would be revenue shared with Taobaoke and thus sold immediately when a large number of Taobaoke help with the promotion of the products.

This channel includes apps such as Alimama（阿里妈妈）, a butler App where vendors organize the backend of their ecommerce stores. Tmall and Taobao vendors have to access their Alimama accounts in order to manage and operate their stores. All store related settings, such as promotional plan and commissions setting are done here.

Official platform serves two purposes; planning and fund-raising. Vendors can set different types of marketing plans for their stores and they can also access different verified fund-raising apps such as Etao（一淘）, Ruyitou（如意投） and Tuanzhang (团长) to attract investments. Tuanzhang helps vendors with SKU selection in return for commissions. Additionally, vendors can see orders histories and detailed account information in the official backend system. 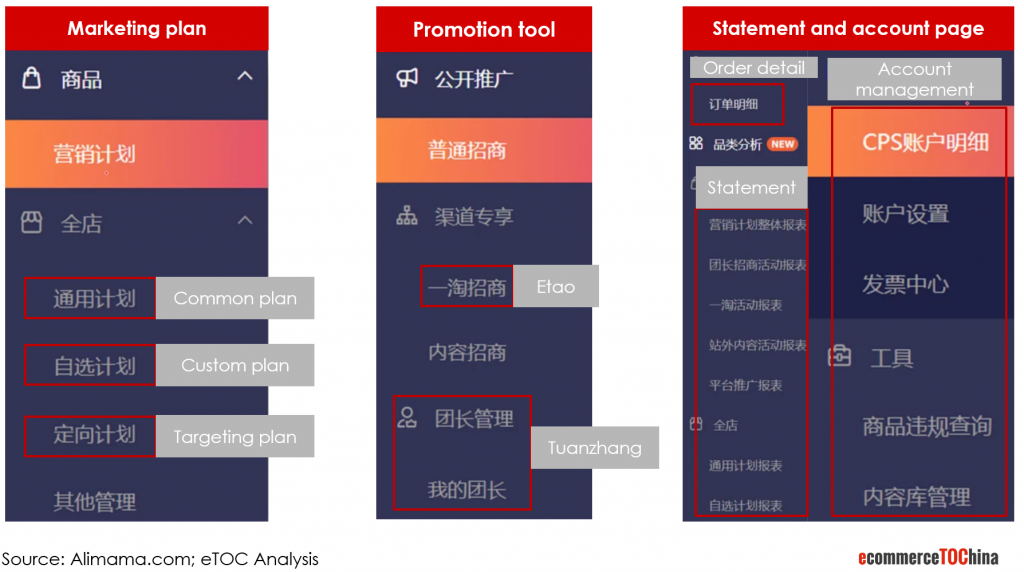 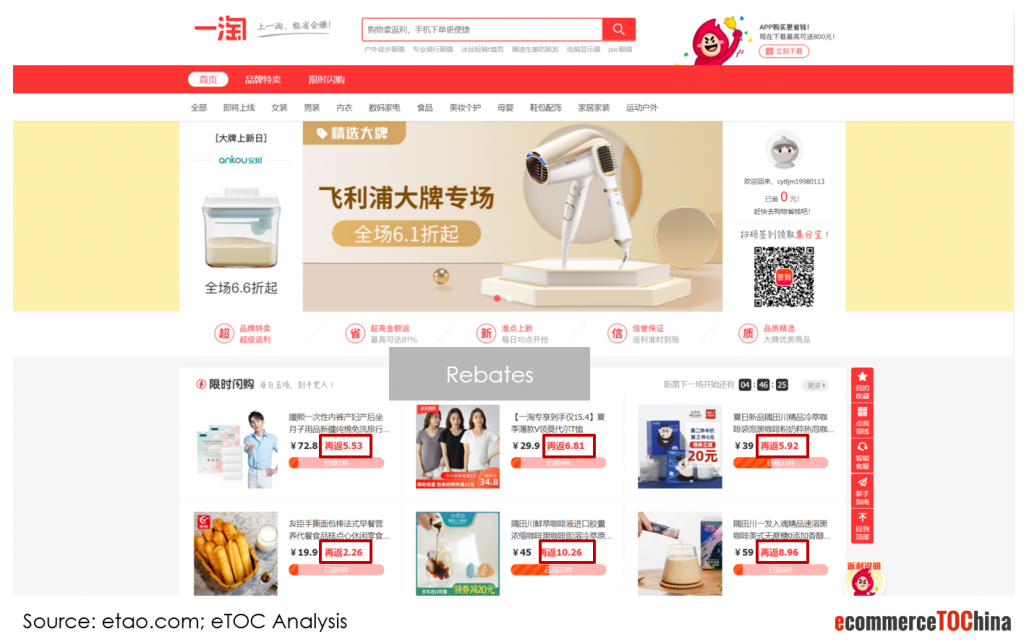 Taobaoke also promotes items and stores through events. The main objective is to boost sales and this is usually achieved with rebates or price reductions. Taobaoke employs two different promotional strategies when it comes to events. The first is done through platform events. This method incites high costs since proprietary sites or Apps, such as Fanli （返利）, must be created for the event. The second is done through social networking, more specifically; community e-commerce. This method is less demanding in terms of both cost and resources because R&D isn’t in the picture anymore. Instead, they rely on social media platforms such as WeChat groups and QQ groups. 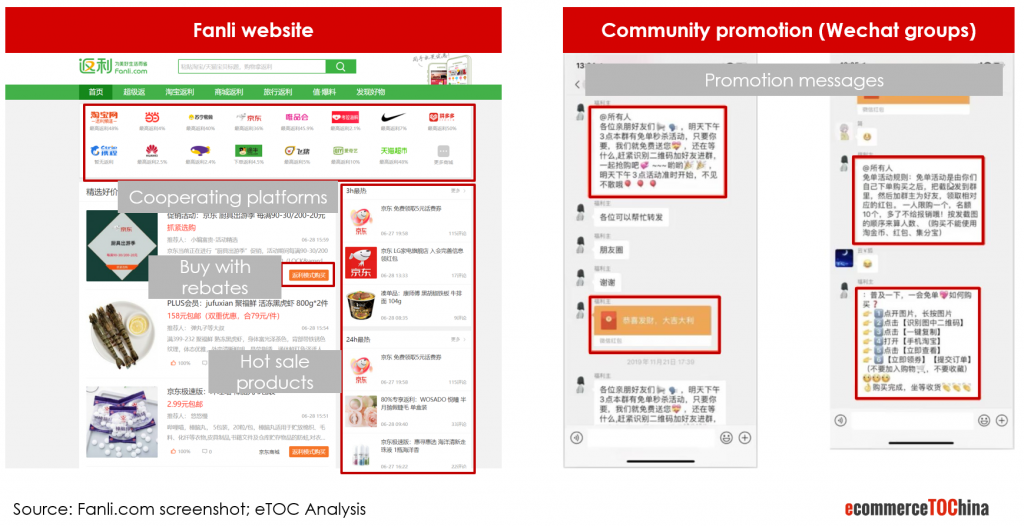 Influencers and KOLs on Taobaoke are gaining traction. Some influencers are on the Taobao platform(In-tao). Typical examples include Taobao live streaming(淘宝直播), Youhaohuo （有好货） and Wao video(哇哦视频). Some are displayed on Taobao’s APP homepage and some are embedded within the search function. The rest of the influencers are on third-party platforms such as Douyin, Weibo, Red and Bilibili (Out-tao). Out-tao becomes more and more important nowadays because usually they bring much more traffic than in-tao. 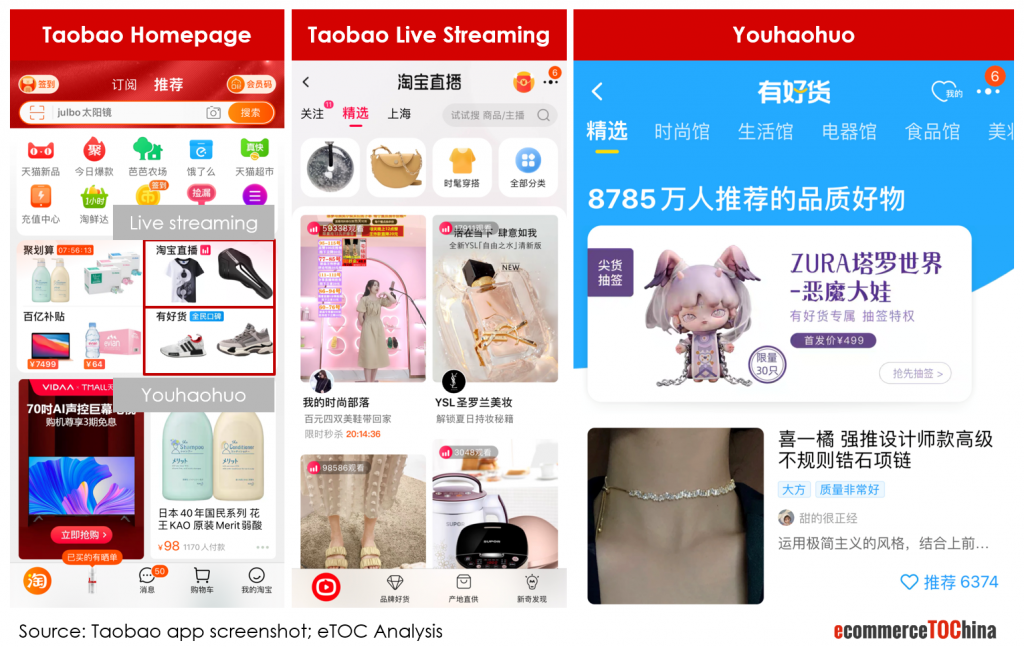 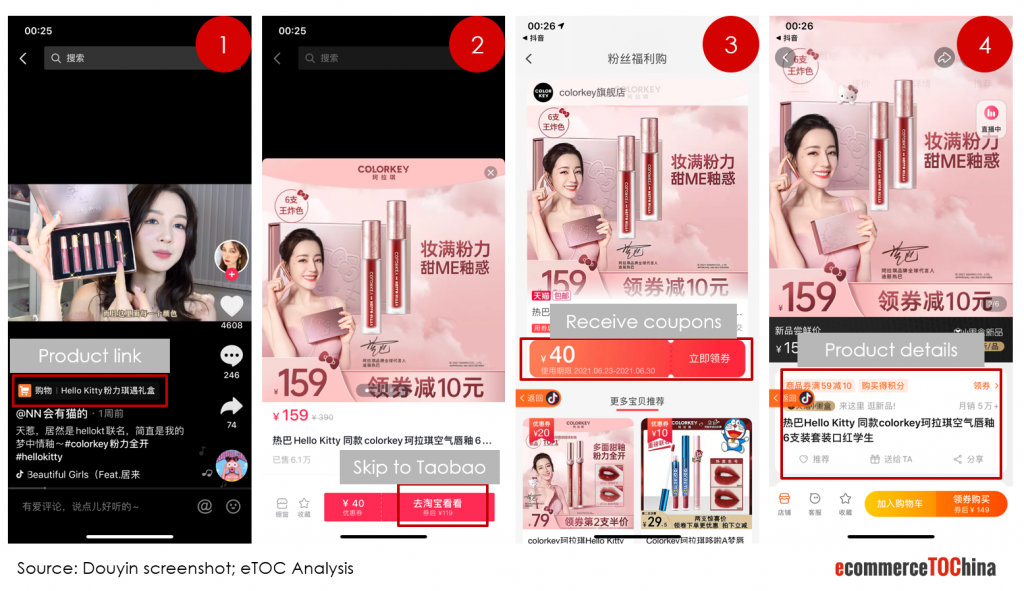 As one of the most popular short-video platforms with over 300 million daily active users, Douyin provides endless opportunities for Taobaoke. By allowing content creators to showcase links to Taobao in their videos has completely revolutionized the industry. Douyin quickly became one of the best channels for affiliates to promote products due to its massive user base.

The requirement to sell through Douyin used to be stringent in the past. Content creators had to first gather at least 10k followers to become an influencer. But Douyin has since then canceled this policy in order to encourage Taobaoke promotion. However, gathering followers is still the main goal for content creators as more followers lead to more traffic which eventually converts to more sales. To attract followers, content creators need to upload regularly and find ways to retain interest. Live streaming is another important tool for gathering followers since it lets content creators engage with their viewers. These content creators will need to fill in their personal information in order to promote and sell on Douyin. Next, to earn commissions as an affiliate, registration as a Taobaoke affiliate on Taobao Alliance is necessary. After completing these tasks, the products could then be showcased in their Douyin videos. One important thing to note is that the product listed should be directly related to the video content and channel. For example, a food livestreamer can not recommend beauty products in their shared lunch videos. Cookies or  beverages are a better choice.

How to join Douyin Taobaoke Game

For vendors, the best solution is to seek a balance between budget and market exposure. KOLs (Key Opinion Leaders) definitely have more traffic on Douyin and are more effective in helping to promote products. However, KOLs are not cheap; brands often need to try to negotiate for a better price. KOCs (Key Opinion Customers) are another option for vendors to cooperate with on a tight budget. Of course, KOCs do not command as much influence as KOLs. Brands can also choose to operate their own account to promote on Douyin. But this is time-consuming, and the traffic generated would be relatively limited compared to cooperating with other content creators.

1）Actively use the official tool Tuanzhang to promote. Tuanzhang is the middleman of the merchant and Taobaoke. They help new merchants to sell out their products to consumers and earn commission fees. The coupons distributed by Taobaoke we see are provided by Tuanzhang.

1) For less popular product categories, educating consumers and highlighting the needs through messages is the key.

2) Distribute resources to different channels and platforms. Don’t rely on one single platform or channel to promote.

3) Use the traffic of hot sell products to promote less popular products.