As a short-video-based app with live streaming function, Kuaishou (Chinese: 快手), has gained great attention in Chinese social media. Domestic companies use Kuaishou to target users from lower-tier cities. With its authentic network and an increasing number of celebrity users, the app excites people of all ages. Through this Kuaishou guide, you will learn the opportunities and challenges for e-commerce players on the Short Video platform.

1. A quick tour to Kuaishou

1.1 Kuaishou: innovative and based on short videos.

The app Kuaishou is also known as Kwai in China. It was originally founded as an app for sharing GIFs. In 2012 came the transformation to a short video-based app that allows its users to record and share videos. Between 2013 and 2016, Kuaishou launched its social community and live streaming function sequentially, pushing the users’ experience to a whole new level. With its proactive approach to the users and innovative strategy, Kuaishou has become one of the ten internet giants in China after its IPO in 2021.

On Kuaishou, you will have an authentic impression of Chinese ordinary people’s lives. When you scroll down the screen, you might see a migrant worker remolding his 7m2 apartment, a husband pulling off childish pranks on his wife, and so on. Short videos of ordinary people dominate on the app and their insights represent a large part of the Kuaishou community.

1.3 Who is using Kuaishou

It is noticeable that Kuaishou grassroots users indeed have tremendous purchase power in the sinking market. According to 2020 Kuaishou Crowd Value Report released by CBN Data, Kuaishou has more than 300 million daily active users (DAUs). Among all the users, over 55% of the users come from low-tier cities and rural areas. Moreover, above 75% of users are generations after 85s. Compared to white collars struggling in first-tier megacities, “small-town youngsters” may have more disposable income and leisure time. They also have rising demand for vulgar entertainment and social activities, which explains why Kuaishou’s down-to-earth videos fascinate these grassroots users and why Kuaishou’s e-commerce market possesses excellent potential.

According to Kuaishou Big Data’s report on Kuaishou’s e-commerce ecosystem, the gross merchandise value (GMV) has increased thousandfold from RMB 96.6 million to 106.6 billion in the first half of 2020. This now makes Kuaishou the second largest live streaming e-commerce platform right after Taobao.

How has Kuaishou managed to experience such an incredible growth? 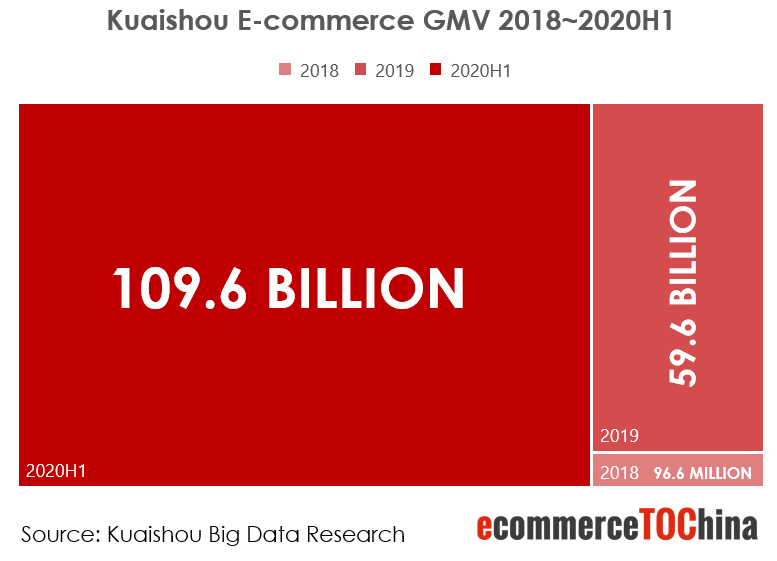 The so-called “Laotie Economic” (老铁经济 in Chinese) well summarizes how fanatical purchasers pay for their favorite live-streamers. “Laotie”, a slang usually used in Northern China, refers to the one you are close to as a brother. In Kuaishou live streaming, this expression went viral. Since then, live streamers have been calling their friends, fans, and other visitors to their show “Laotie”. “Laotie Economic” has brought trust-based deals which boost Kuaishou’s vitality.

However, “Laotie Economic” is definitely not a simple overwhelming selling, but an authentic trust-based relationship with consensual deals. As we have already mentioned, Kuaishou is a platform where the most ordinary people gather to share their daily lives with each other. Unlike Taobao, it does not prioritize the most famous KOLs. Kuaishou’s traffic algorithm also gives a chance to unknown and ordinary people.

For instance, on Kuaishou, there is a Hebei cargo driver called “Baoge”. He now has over 4 million followers and produced 1784 short-videos. Baoge posted his daily life of how he does easy cooking on the roadside during work, how he makes friends with other drivers, and so on. Once he bought up an entire truckload of onions that was considered unsaleable. He then resold it to his fans, who came from all over the country to help him offload it. His fans treat “Baoge” as their “Laotie” because through his posted short-videos, they have a clear image of “Baoge”, an ordinary person just like them. As a result, they are willing to support him as a friend. This example illustrates very simply how people build trust and create an emotional bond with each other. This is the basis for a consensual business on Kuaishou. 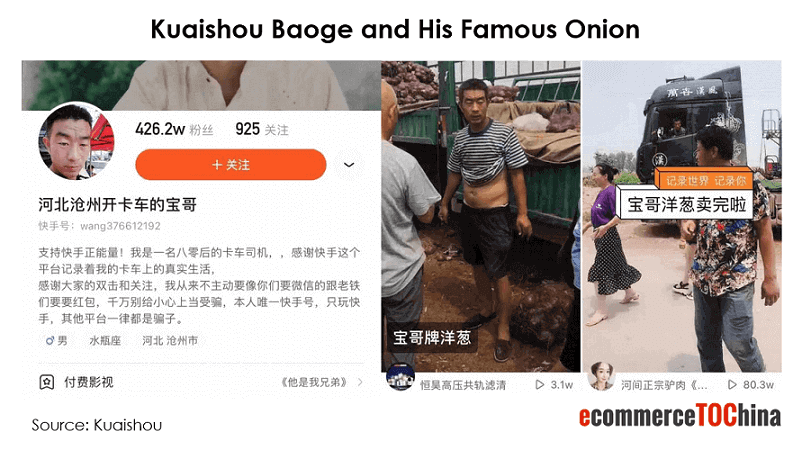 Besides consumers, of course, live streamers also benefit from the “laotie economic”. The “Xinba Family” is one of the most famous KOLs on Kuaishou and is led by “Xinba”. According to CBN Data, Xinba achieved the second largest GMV among all e-commerce live streamers (including Taobao Live) in 2020.  During the 2020 “618” festival, he streamed live for over 10 hours and sold over 1 billion RMB worth of products. Kuaishou also invites entrepreneurs and famous stars to their live streaming sessions to sell goods, generating impressive revenues. 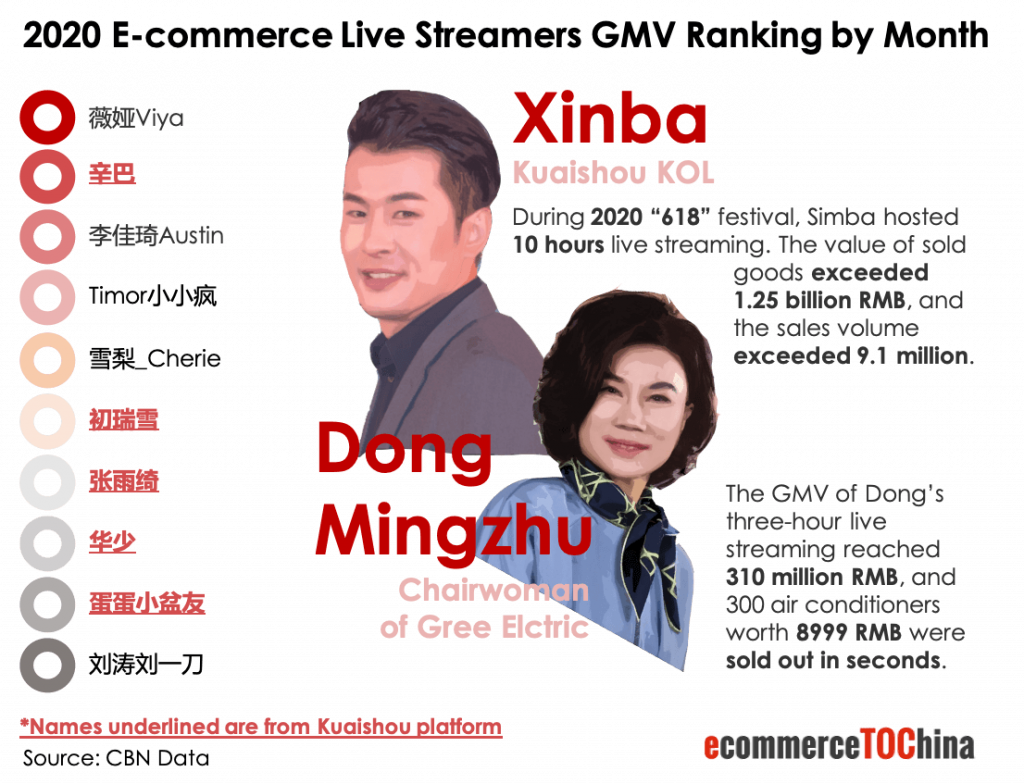 However, it is not the celebrities that account for the largest proportion of GMV. According to Zhang Yipeng, manager of Kuaishou E-commerce Marketing Center, it is the KOLs with 0.1 ~ 1 million followers. To optimize the platform configuration, Kuaishou is taking steps to introduce more professional streamers from multi-channel network (MCN) companies. They should assist live-streamers with better quality. Kuaishou’s inclusiveness strategy energizes those mid-and-low-tier producers to a large extent, bringing confidence to e-commerce newcomers.

Kuaishou’s “Laotie” customers have great potentials for e-commerce players. Miaozhen’s Kuaishou-users-targeted research shows that 92% of Kuaishou users are satisfied with the products the live-streamers recommended. 84% of Kuaishou users are even willing to receive recommendations by the live streamers in the future. The loyalty of customers as “Laotie” brings stable private traffic, as well as a high conversion rate and repurchase rate, which corresponds with Kuaishou’s surprisingly large GMV.

For instance, during the 2020 April Kuaishou international beauty brands festival, La Prairie Skin Caviars, whose price reached 3000 RMB each, were sold out in one second. It may refresh our knowledge about Kuaishou users, that they are well following the pace of consumption upgrading. 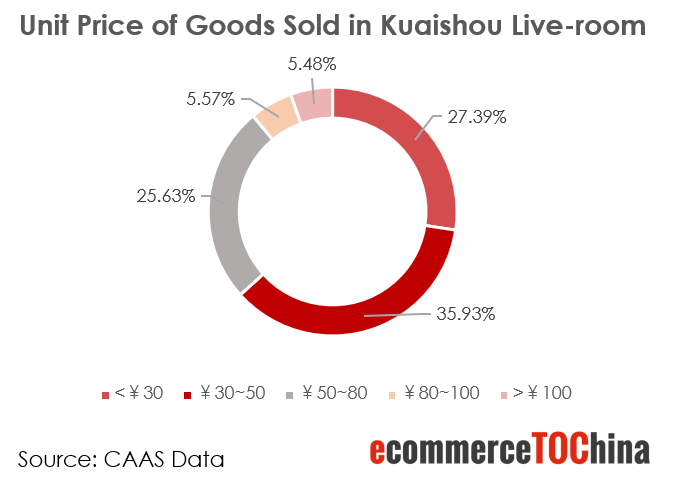 Although Kuaishou achieved high GMV in live streaming shopping, the overall layout for the e-commerce market, concentrating on the low-tier brands, may not fully stimulate the customers’ purchasing power. Currently, Kuaishou’s best-sellers categories are foods, farm products, apparel, daily supplies, and many of the products have no brand. Take the makeup market as an example. Researches conducted by Kuaishou Big Data Research and CBN Data reveal that the penetration rate of makeup content on Kuaishou has reached 59%. Additionally, there is a continuous increase in the single trade volume of makeup products over 200 RMB. However, the ATV of best-sellers in the Kuaishou makeup market is still lower than 100 RMB, brought by 2020 Mianchao Technology’s Live Streaming E-commerce Data Report. Furthermore, these products are mostly domestic brands such as M’AYCREATE. 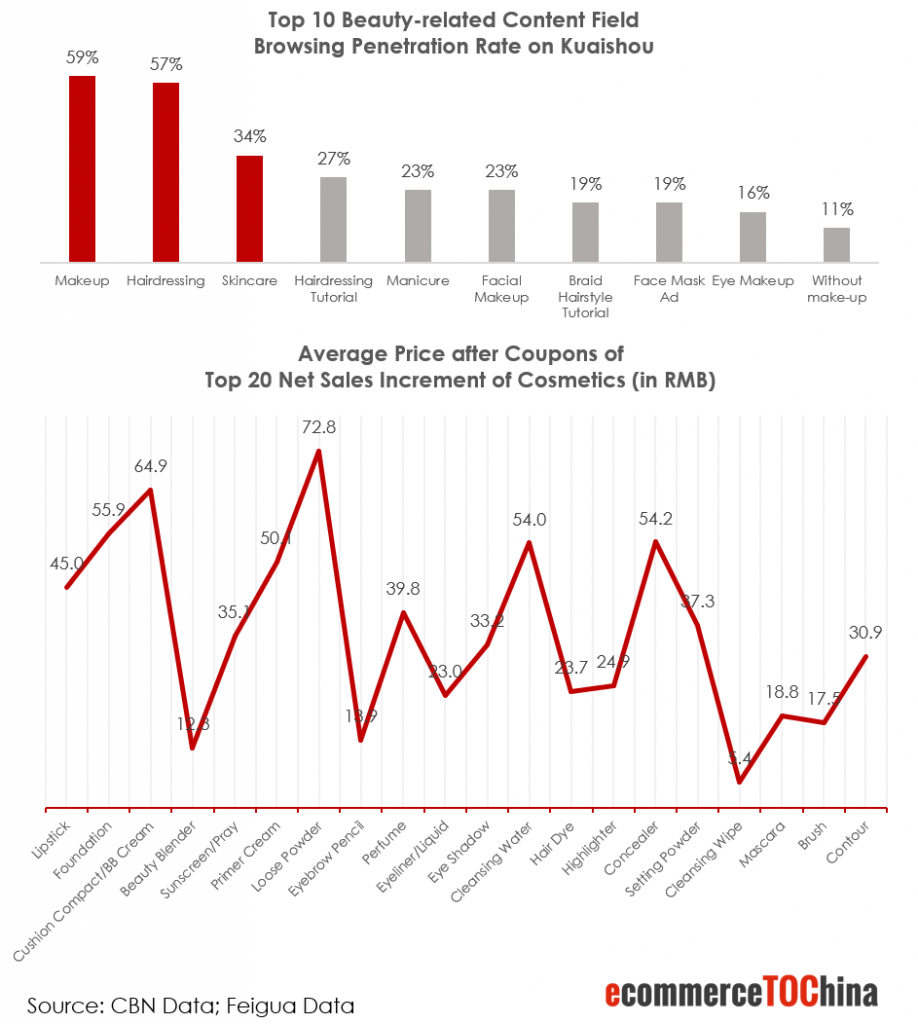 3. Brief Comparison between Douyin and Kuaishou 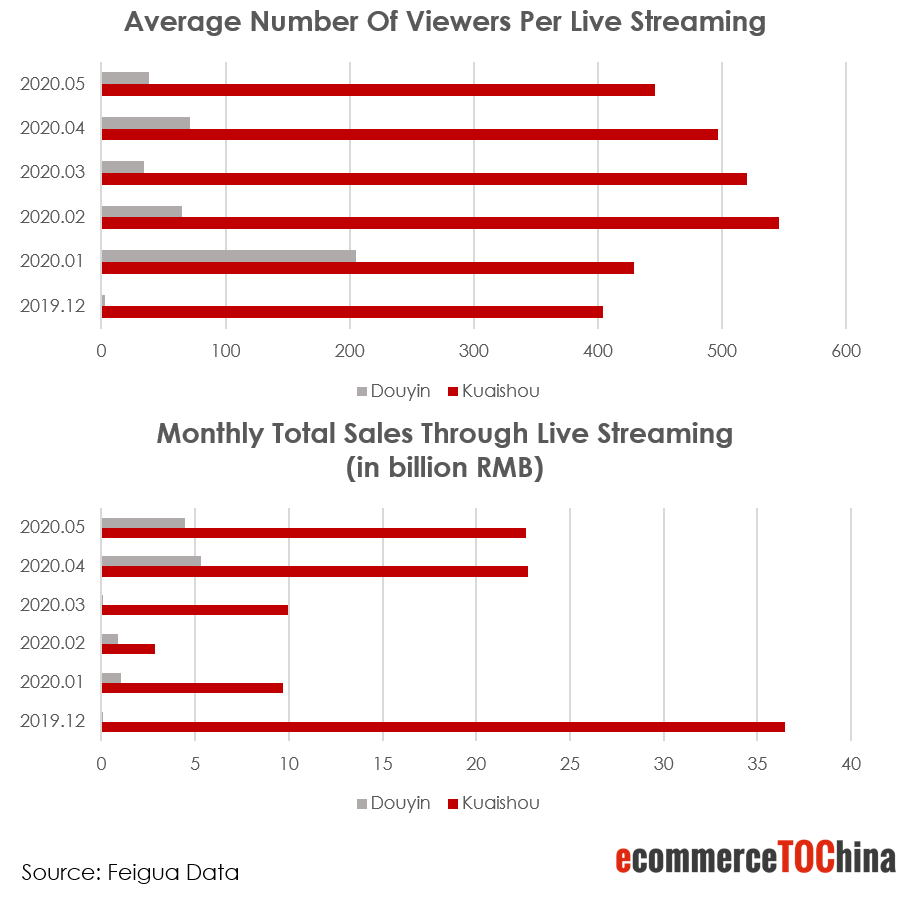 If we dig into the overseas market, Tiktok outperforms Kwai far beyond and is in vogue in the US as well as India. After several attempts in Korea, Russia, Thailand, and Indonesia, Kwai returned to silence. With more competitors flooding in the industry, it may be a tough decision for Kwai to renew its marketing strategy and race with other companies.

4. Kuaishou - “Embrace every kind of life”

In general, the short video platform Kuaishou is still a promising giant in the Chinese short-video and live streaming industry, and it provides a massive opportunity for e-commerce players. As Kuaishou’s slogan goes, “embrace every kind of life.” It provides an all-encompassing platform for Chinese grassroots, especially those from low-tier cities, to share their authentic views. As random viewers, we look through their lives, establish a trust relationship with them, and benefit each other from the “Laotie Economic” with tremendous GMV achieved. Still, the Kuaishou e-commerce platform has great potential to step forward. Customers are willing to upgrade the consumption, and manifold sellers are welcomed to enter the underestimated market with a relatively low threshold. Although the opportunities and the unknown coexist, Kuaishou may create more value for people in the future.

Want to have a first free consultation session about selling and growing in China via e-commerce and digital marketing? Contact us.